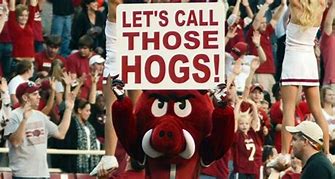 In 2020, we could always us a feel good story.  That’s especially true in the sports scene of this odd pandemic year.

Ladies and gentlemen, let me introduce you to the Arkansas Razorbacks football team!

The Razorbacks have been the sad sacks of the SEC for the past several years.  With 2-10 records in the past two seasons, the “Woo-Pig Sooie!” team from Fayetteville went 0-for-SEC in those years, too.

The Arkansas Razorbacks were so bad (how bad were they?) that they have chewed up and spit out four coaches in the past 8 years.  John L. Smith lasted one season (2012) in going 4-8.  He was tossed overboard for former Wisconsin coach Bret Bielema.  Though Bielema had a few years of moderate success, he was sent packing at the end of his fifth season in 2017 after a 4-8 campaign.

It got worse after that.

Former SMU coach Chad Morris took the reins in 2018.  Morris had miraculously transformed the Ponies into a winner and was considered an offensive guru.  Alas, two years of 2-10 overall (and 0-for-SEC) chased Morris from the hills.

Arkansas was at another crossroads.  The university’s football program had a long and proud history of winning more than they lost and competing for championships.  The fans that fill Razorback Stadium in Fayetteville are among the most vocal in the SEC and the nation.

In 1992, though, the Arkansas Razorbacks took a big step-up and joined the Southeastern Conference.  More importantly, the Hogs were placed in the incredibly tough SEC Western Division.  They now compete against the likes of Alabama, LSU, Auburn, Texas A&M, Mississippi State, and Ole Miss.

Beginning in that same year of 1992, the SEC has captured the college football national championship an incredible 14 times in 28 seasons.   The SEC West (home of the Arkansas Razorbacks) has won 10 of those 14 championship trophies.   There is no tougher division to play college football.

This means that Arkansas doesn’t have the ability to rebuild slowly in order to have a competitive season.  The team faces the football equivalents of Apollo Creed, Clubber Lang, and Ivan Drago on many Saturdays in the fall.

Cue the “Rocky” music, because the 2020 Arkansas Razorbacks have climbed off the mat and are fighting back once again!

The team hired a career assistant football coach by the name of Sam Pittman to be the next Head Coach at Arkansas last December.  Pittman played football for small school NAIA powerhouse Pittsburg (Kansas) State from 1980-1983.  He earned All-American honors and was inducted into the school’s athletics Hall-of-Fame in 1988.  After a year as a graduate assistant with his alma mater, Pittman’s lengthy coaching resume included three high school football teams, one junior college, and then 11 more stops slowly ascending the ladder in major college football.

From 2013-2015, Sam Pittman coached the offensive line for none other than the Arkansas Razorbacks!  In 2016, the coach moved to the SEC East national contender, University of Georgia.

At all of his many career whistle stops, Coach Sam Pittman has been heralded as a terrific recruiter.

Once Sam Pittman was handed the head coaching job back in December, 2019, he went right to work on the recruiting trail.   Sure, he needed players, but he also needed a quality coaching staff, too.

He landed a big one in defensive coordinator Barry Odom.

Odom, the former University of Missouri head coach from 2016-2019, is known for having tough defenses throughout his coaching career.  Though Pittman is an ace at offensive lines, he then added a young offensive coordinator named Kendal Briles.  The son of former Baylor coach Art Briles, the younger Briles has a track record of improving offenses at Baylor, Houston, and Florida State.

Next, Sam Pittman found a seasoned quarterback to run his new offense.  Former Florida Gator starting quarterback Felipe Franks suffered a season-ending ankle injury in 2019.   As he watched his replacement, Kyle Trask, lead the Gators to a terrific season last year, Felipe Franks decided to transfer and start over again.

Guess who recruited him to come to Arkansas?  Yep, it was Sam Pittman again.  Notice a trend yet?

Felipe Franks said he decided to transfer to play ball in Fayetteville because of “how genuine everybody is.”

Sam Pittman’s first recruiting class in 2020 was ranked #30 in the country.  For a team coming off back-to-back 2-10 seasons, that was a noteworthy accomplishment for the 58-year old rookie head coach whose team plays in the rock’em, sock ‘em SEC West.

Arkansas opened their 2020 pandemic-shortened ten game SEC schedule with a game against their new coach’s former employer – the #4 ranked Georgia Bulldogs.   Georgia won the game 37-10, but the Razorbacks actually led 7-5 heading into halftime.  The team’s belief in one another had taken a major step upward in their opening game.

The Hogs went to Mississippi State in Week #2 and grabbed their first SEC win in three years with a 21-14 victory over the Bulldogs in Starkville and evened their record at 1-1.

Then, Arkansas traveled to nationally-ranked Auburn and lost 30-28 on a highly controversial officiating call relating to the Auburn quarterback improperly spiking the ball in the waning seconds of the game.   Many believe that it should have been ruled a fumble.  Alas, Auburn kicked the game winning field goal with seven seconds left to take a two point win.

In Arkansas’s fourth game Saturday in Fayetteville, the Hogs blasted Ole Miss 33-21 as the Arkansas defense came away with seven turnovers in the game.  With an incredible three interceptions during the game, freshman walk-on defensive back Hudson “The Hat Trick” Clark personifies the new “can-do” Arkansas team mentality.

Though Arkansas is only 2-2 on the season, the team has two more SEC wins than the previous three seasons combined.  Sure, the Hogs will still have to play Texas A&M, Tennessee, Florida, LSU, Missouri, and will end their season at Alabama.  Arkansas will take a few lumps along the way from here on.

For the Arkansas Razorbacks faithful, though, it’s time to proudly “Call the Hogs” once again.  Their new head football coach has this football team on the rise in 2020.

If you looking for college football turnaround story, it’s time to take a look at this year’s Arkansas Razorbacks!   Woo-Pig-Sooie, indeed!