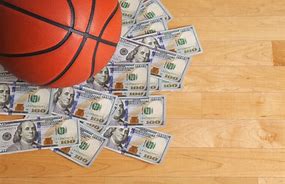 Basketballs are simply a circular orb made of leather and filled with air.  The goal of the game of basketball is to put the circular orb through a slightly larger circular destination called a hoop.

To win a game of basketball, you must put the circular orb through the circular hoop more times than your opponent during the time allotted for the game.

A brilliant analysis, eh?  Stay with me, though.

I have come up with this analogy after several days of pondering about the current corruption trial in New York involving payoffs of college basketball players by an assortment of shady characters (head coaches, assistant coaches, middlemen, family members, AAU coaches, Santa Claus, etc.).

Though not a surprise to anyone, it was revealed on Wednesday that a University of Arizona basketball player named Deandre Ayton may have received payments of $10,000 per month from “someone” to play his one and only year of basketball in 2017/2018 for the Wildcats prior to bolting for the NBA.  As the #1 draft pick of the Phoenix Suns last year, Ayton is paid $733,000 per month (or $8.8 million per year) by the pro league for his services.

From a purely economic perspective, Ayton’s alleged pay while at the University of Arizona was a relative bargain!   However, in college athletics, it wouldn’t have been legal.

Just why would such a highly-recruited high school athlete come play at this particular university?

With over 14,000 seats filled for about 20 home games per season, the Wildcats men’s basketball team generates about $10 million in profits annually for the university’s athletic programs.  The revenue from the men’s basketball team is used to help defray the costs of other athletics programs (such as golf, swimming, etc.) whose expenses are higher than revenues generated.

The other college program receiving a very negative spotlight during this college basketball scandal is LSU.   About a month ago, it was revealed that “someone” may have offered to pay Baton Rouge freshman, Javonte Smart, an amount equal to the “NBA rookie minimum” (over $800,000/year) to play for his hometown Tigers.

During this week’s ongoing college basketball scandal hearing, it was revealed that yet another LSU freshman (Naz Reid from New Jersey) may have been offered up to $300,000 to play his one and only season in Baton Rouge. Both LSU players have now entered the NBA draft after only one season in college.

LSU’s young basketball coach, Will Wade, has turned around the moribund hoops program in just two seasons.   After the team went 10-21 the year before the new coach arrived, Will Wade’s first year record at LSU improved to 18-15.  This year’s second season had the Tigers winning the SEC (for the first time in ten years) with a 28-7 regular season record.

In the case of LSU, the suspicions are sky high as to how Coach Will Wade has been able to recruit so many high-level basketball players to the program.

I would guess that following the money would be a good possibility.

Most of us would like to think that the NCAA, the governing body of college athletics, would bring the hammer down on the universities involved in this growing basketball scandal.  In order to make sure that these travesties never happen again, the NCAA must step-in and do something for the integrity of college athletics, right?

The NCAA makes millions of dollars every season by showcasing these same college athletes in the NCAA’s annual “March Madness” championships, too.  If the NCAA were to seriously police the programs and enforce the rules across the board, the current men’s college basketball tournament would be less financially attractive.

Since everyone in this scandal (and we haven’t even mentioned the AAU, the shoe companies, and the other shady middlemen) has a monetary interest in keeping the status quo, I suspect that we will (eventually) have more coaches and assistants relieved of their duties by their respective universities very soon (under some indirect pressure from the NCAA to “do something”).

I also expect that the NCAA rule book (which is already far too voluminous and confusing to anyone other than attorneys) will be gaining another few hundred pages of new rules and then expect all college athletics programs will live by these amended guidelines in the future.  Until it happens again.

Every year, there are hundreds of millions of dollars (primarily originating from a number of athletics apparel companies which are subsidizing teams in the AAU, high schools, and college sports in order to advertise their overpriced gear to young potential buyers) being doled out through an incredibly sophisticated web of monetary distribution with each party taking their cuts.

This current college basketball scandal’s complexity reminds some people of the way alcohol continued to be produced and distributed during the so-called “Prohibition” period of the 1920’s and early 1930’s.   Despite alcohol being declared illegal during that period, a sophisticated and secretive market evolved and existed to take their cut of the money being doled out by a nation of willing buyers.

Today’s green circles of cash which have been corrupting so-called “amateur” basketball are now so deep that they boggle your mind when thinking about all the participants.

If no one in these green circles of cash is willing to slit their own financial throats to end the madness, why should anyone be surprised when the next “Aha!” cheating moment in college basketball occurs?