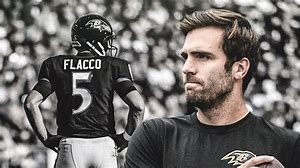 When you think about your favorite NFL team, consider the cost of an experienced winner as your quarterback and field general.

In today’s NFL, the average team’s total salaries will run about $178 million for 2018.  With 53 players on the active roster, the average per player is $3.35 million.

According to one report, a whopping 20 of the top 25 NFL salaries being paid in 2018 belong to the quarterback position.  These QB’s earn more than 11% of an NFL team’s payroll.

I read an article today saying that the Baltimore Ravens are actively shopping a deal to send Joe Flacco (their former starting quarterback and leader of the Ravens’ sole Super Bowl victory just six years ago) to another team for 2019.  He has been replaced in the starting line-up over the past few weeks by a rookie, Lamar Jackson, who has sparked the team of late and makes a whole lot less money than Flacco does.

If the Ravens can’t find anyone willing to swallow Joe Flacco’s $22+ million salary (good for #12 on the highest paid players’ list), the team may actually consider cutting him before next season and taking a financial loss.

So, why would the Ravens have paid their quarterback such a large amount of money if he can’t even beat-out a rookie?

If your favorite NFL team wants to win a Super Bowl, your best chance of winning should include having an NFL Hall-of-Fame caliber quarterback at the helm.

It’s true, and I have the statistics to back-up my claim.

By every Super Bowl decade, your team will have its best chance to win with a Hall-of-Fame level quarterback running the offense.  In the first ten Super Bowls, every winning quarterback eventually became an NFL Hall-of-Famer.

For the most recent decade, I have made a few assumptions:

Based on their performance outside of Super Bowl seasons, I do not believe either Joe Flacco or Eli Manning (two Super Bowl titles) are future Hall-of-Famers.  The jury is also still out for Ben Roethlisberger (two Super Bowl wins) of the Pittsburgh Steelers.

It is mostly due to good timing and luck by the players and some poor business judgement made by some of the franchises.

That is why some teams haven’t made it to the Super Bowl (Detroit) or recently (Minnesota hasn’t played in it since 1977 and Oakland since 2002).  The smartest NFL teams realize that the quarterback position is a significant piece of the puzzle, but it is certainly not the only one needed in order to build a championship team.

Some franchises feel that grabbing a talented quarterback will help put the team into the Super Bowl hunt (and sell tickets and merchandise), while others seem happy with a competent and less expensive leader of the offense to make more money available for other key players.

This season, several NFL franchises are successfully utilizing younger quarterbacks (with their cheaper rookie contracts, of course) to make a run for the playoffs.  Look no farther than Dallas (Dak Prescott), Houston (Deshaun Watson), the L.A. Rams (Jared Goff), Chicago (Mitch Trubisky), and Kansas City (Patrick Mahomes) as saving cash for their teams by trying to maximize their youthful QB’s and save money for other key teammates.

As for Baltimore’s very expensive benched QB Joe Flacco, he has earned a Super Bowl ring and a Super Bowl MVP trophy for Baltimore.  At the time, the Ravens believed Flacco was the future of the franchise and paid him accordingly.   The same goes for Eli Manning of the New York Giants.

Though it is far too early to know how things will play-out at the end of this  NFL season, many teams are looking to utilize cheaper quarterback options entering the playoffs and hoping to grab a Super Bowl ring without paying handsomely for a veteran offensive leader.

Let’s see if this new trend will pay dividends in the playoffs ahead.