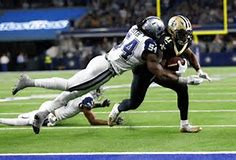 During the fourth quarter of the Thursday night NFL football game between the New Orleans Saints and the Dallas Cowboys, a defensive player for the Cowboys clearly launched himself helmet first into New Orleans Saints running back Alvin Kamara.

Was there a penalty called on Dallas?  No.

Did the referees confer on the field or with the replay booth to review the play?  No.

Does the NFL really care about putting an end to the dangerous (to both players) tactic of making a tackle by leading with your helmet?  Apparently not.

Talk is cheap, NFL.  Your actions speak louder than words.

During the offseason, the NFL talked a lot about getting tough on unnecessary helmet-to-helmet contact which may have immediate (concussions) and possible long-term (CTE) health implications for the players.

Before we delve into the NFL, let’s applaud how the NCAA is handling the same type of play in college football games.

A penalty flag is thrown at the offending player.  The replay booth reviews the play to determine if the offending player lowered his head and made helmet-to-helmet contact intentionally (regardless of whether either player was injured after the hit).

In college football, once the infraction is verified, the offending team is penalized 15 yards, AND the offending player is ejected from the game.  If the play happens during the second half of a football game, the player must also sit-out the first half of the team’s next game, too.

You bet.  Ask any LSU fan and a similar call which went against All-American linebacker Devin White caused him to sit-out the first half of the team’s battle with Alabama earlier this month.

On the whole, though, college football is clearly sending a message to players that making illegal contact utilizing your helmet isn’t smart and is quite dangerous.  College football players are learning that you’re going to get tossed if caught doing it.

Though I played football in the stone ages, today’s players are still being taught to make a tackle by wrapping-up the ball carrier’s legs.  If the player’s legs are unable to move, then the ball carrier will go either down or your teammates will arrive soon to help bring him down.

Utilizing the crown of the helmet to make a tackle just isn’t very smart.  Not only can a player break his own neck, he can inflict permanent head and brain damage to the other player, too.

Helmets have never been designed to do anything other than offer a little protection for the player’s own head.

The slothful NFL finally made a rule change to address this issue after the 2017 season ended.

From the NFL’s website, here is the current rule:

The Rule: As approved by NFL clubs in March, it is a foul if a player lowers his head to initiate and make contact with his helmet against an opponent. Contact does not have to be to an opponent’s head or neck area – lowering the head and initiating contact to an opponent’s torso, hips, and lower body, is also a foul. Violations of the rule will be easier to see and officiate when they occur in open space – as opposed to close line play – but this rule applies anywhere on the field at any time.​

Penalties for Violation: Loss of 15 yards. If the foul is by the defense, it is also an automatic first down. The player may also be ejected. Ejection standards:

Sounds good.  So we ask again.

Perhaps it is because NFL officials simply aren’t making the calls during most football games even after the new rule was implemented.

During last night’s contest between the Saints and Cowboys, Fox Sports rules analyst Mike Pereira made this comment.

“We haven’t seen many called this year,” Pereira said, “but that’s a clear example of leading with the crown of the helmet.”

This leads me and many viewers to ask again, “Why aren’t the NFL refs making this call?”

My best guess is that the NFL wants to keep the pace of play moving.  Compared to college football’s overly lengthy 3 1/2+ hour broadcasts, the professional league has kept most of its games close to three hours in length.

Is that really their primary excuse?  If so, then the NFL owners, as usual, are winking at each other again while continuing to put profits ahead of the players’ safety.

More and more parents continue to advise their kids to stay away from participating in football due to mounting evidence of likely brain damage years later.

Someone has to make an intelligent decision.

In the meantime, it’s “Heads – you lose” if you play in today’s NFL.