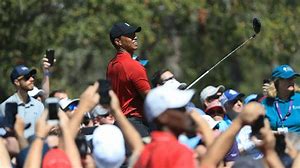 Wow, what a weekend of golf!  Seriously.  The PGA Championship, the final major of the 2018 men’s golf season, has now ended but not without injecting some much needed pizzazz back into the game.

The television ratings?  Even more so!

Nearly lost in the Tiger Woods final round frenzy in St. Louis was the relatively quiet and steady play of the eventual winner, Brooks Koepka.

All he has done this summer is win two of the last three major tournaments!  Koepka’s 2018 Wannamaker Trophy for Sunday’s win should fit nicely between his two consecutive wins at the US Open in 2017 and 2018.

Koepka, whose buff looks are more in keeping with that of a clean-up hitter for your favorite major league baseball team, “kept-ka” (ha ha) pounding his drives down the middle of the fairway and leaving relatively easy shots into the greens at Bellerive Country Club all weekend long.  Impressively, he continued putting golf’s pedal to the metal even while that guy named Tiger Woods was doing his best impression of Jack Nicklaus during the final round of the 1986 Masters.

The crowds in St. Louis were enthusiastic and huge, and those legions of fans pulling for Woods were every bit as loud and supportive as Jack’s pack during his miraculous victory in Augusta 32 years ago.  Tiger’s iron play was spectacular as he drilled one shot after another within a few feet of the pin as the Missouri winds temporarily laid down for the Sunday afternoon showdown.

Tiger Woods has still never won a major golf tournament when trailing at the start of a final round, but Sunday’s sizzling 64 and eventual second place finish was certainly his best effort in the past ten years.  Woods whipped the crowd into a frenzy as he put together a charge on Sunday afternoon that Arnold Palmer would have been proud of.

Like Palmer, Woods was erratic off the tee most of the day.  In fact, he was 0-for-Front Nine in hitting the fairways.  But when you only need ten putts to navigate the first nine holes, good things will happen as Tiger cobbled together an opening three-under par 32 to close-in on the leader with nine more to go.

Meanwhile, Sunday’s final round leader continued playing as if he might have been wearing a set of Bose noise-cancelling earbuds.  Brooks Koepka never backed down as he blasted howitzers off the tee and dropped short irons into the greens all day to finish with a not-too-shabby 66 to earn his two-shot victory.

Woods delivered enough of the drama and excitement to juice the fans watching on television, too.  CBS Sports’ television ratings for Sunday’s final round were up nearly 70% from last year’s same event and posted a sterling 6.1 overnight mark.

Koepka’s win brought him nearly $2 million in prize money as he has likely locked-up “Player of the Year” honors for 2018 with two major wins this season.

Tiger Woods’ stellar play in the past month at the British Open and PGA Championship should earn him a Captain’s pick for the Ryder Cup team in September.

And, with Woods on the Ryder Cup team, NBC is now salivating about having a US golf contingent featuring golf’s newest young heroes like Koepka and one very stealthy Tiger on the loose who appears to be hungry to bag a few victories on the golf course again.

At least for this summer, golf is back!