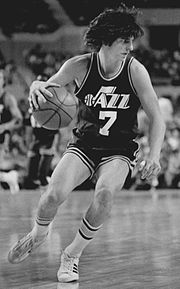 The time has come.  It is long overdue.  It is time to return the team nickname of “Jazz” back to its rightful basketball home in New Orleans!

Though New Orleans’ current nickname of Pelicans (the state bird of Louisiana) is pleasant enough for the city’s professional basketball franchise, just about everyone outside of the state of Utah knows that N’awlins should reclaim its former basketball moniker.

New Orleans is world renowned for its jazz.  Louis Armstrong, Pete Fountain, Al Hirt, Wynton Marsalis, and the Dukes of Dixieland are just a few of the famous jazz music performers who have been linked to New Orleans over the years.

According to one website, Salt Lake City does have a few jazz clubs open on the weekend.

New Orleans has the French Quarter featuring Bourbon Street with its jazz clubs playing for patrons day and night.

The New Orleans Jazz and Heritage Festival (the musical one) is held every spring for nearly two weeks with hundreds of thousands of visitors.

Before Hurricane Katrina, the city even sported a Six Flags amusement park named “JazzLand” (which was severely damaged during the hurricane and remains closed today).

Even the U.S. National Park Service acknowledges a long history of jazz music in Louisiana’s famous Crescent City since 1895.

Enough is enough.  This is not a negative story about Salt Lake City or the state of Utah.  They have done a terrific job of supporting their franchise over the years.  They will also do a fine job supporting their professional basketball team with a new and more appropriate nickname in the future.

Can you imagine the NFL’s Green Bay Packers moving to another city to become the “San Antonio Packers”?  Neither can I.

How did Salt Lake City become the home of the Jazz?

Salt Lake City and New Orleans share a common basketball link dating back to the American Basketball Association of the late 1960’s and early 1970’s.  The Utah Stars and the New Orleans Buccaneers both played in the ABA.  Worth noting is that the 1971 Utah Stars possess one thing that has alluded the current Utah Jazz – a league championship.

The New Orleans Buccaneers were an early casualty in the ABA as the team moved to Memphis in 1970.  Fortunately for New Orleans, the National Basketball Association awarded an expansion franchise to the city in 1974, and the New Orleans Jazz was born.  Featuring the Mardi Gras-themed colors of purple, green, and gold, the new NBA team played most of their home games in the cavernous Louisiana Superdome.

Meanwhile in Salt Lake City, the ABA folded in 1976 with the NBA grabbing four of the most promising franchises (Nets, Pacers, Nuggets, and Spurs).  Salt Lake City had terrific fan attendance, but the NBA (at the time) thought the market was too small to be granted a franchise.

The New Orleans Jazz traded with the Atlanta Hawks to acquire LSU phenom, Pistol Pete Maravich (shown at the top), to draw fans to the Superdome.  Unfortunately, the team’s payroll became strained after bringing Louisiana’s favorite hoopster home to become the face of the franchise.  The New Orleans Jazz basketball team added another color to the palate – red ink – at a time when the ownership couldn’t afford it.

Just before the 1979-1980 season began, the New Orleans NBA franchise suddenly relocated to Salt Lake City.  It was too close to the beginning of the season to change the nickname of the team, so Utah retained the name “Jazz”, the musical note logo, and even the Mardi Gras colors of the team.

Fast forward 39 years, the Utah Jazz have been a very successful franchise.  With NBA Hall-of-Famers Karl Malone and John Stockton leading the way, the Utah Jazz made it to the NBA Finals twice, but they are yet to win an NBA championship.

My theory is that the team is jinxed and should return the rightful nickname of Jazz back to New Orleans.  For the fans in Utah, it would mark a chance to start anew with a fresh nickname.  The Utah Stars of the ABA were a champion.  It’s time for a change in Salt Lake City.

Take note, Utah.  Time to face the music, and give the Jazz back to New Orleans!