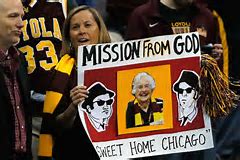 Cinderella has officially arrived at the big dance!  The #11 seed from the South region of the NCAA men’s college basketball tournament has crashed the party of basketball’s blue bloods and will bring their ever-growing legion of fans from around the nation and the world into San Antonio next Saturday for the Final Four.

The Ramblers of Loyola University-Chicago are going to the big dance for the first time since 1963.

A week prior to the start of this year’s March Madness, your ever-observant SwampSwami successfully (for once!) deemed Loyola-Chicago as his sleeper pick in this year’s field.  Moral – it’s better to be lucky than good, because I also picked Virginia to win it all (oops).

What I wasn’t aware of at the time of the prior article was the secret weapon of Loyola-Chicago, Sister Jean.  By now, everyone knows that this 98-year old basketball-happy nun offers-up a prayer for the team before every game.

When asked after an earlier win about how she motivates the Loyola team prior to tip-off, the team’s inspirational beacon said, “I told them that we were going to win, that we could do it & that God would be on our side.”

I seem to recall a couple of Chicago-based musicians whose mantra was that they, too, were on a mission from God.  Jake and Elwood (aka The Blues Brothers) didn’t do anything the orthodox way.  But they really had that positive Chicago swagger and, wow, could they dance!

This Saturday, the University of Michigan (winners of the West Region) will stand between America’s college basketball darlings and their chance to play for the 2018 national championship.

Hey, Michigan.  Did you know that the city which is home to this year’s Final Four, San Antonio, is also known for their five historic Spanish missions (including The Alamo)?

Your Chicago-based opponent is rambling into town on yet another mission!