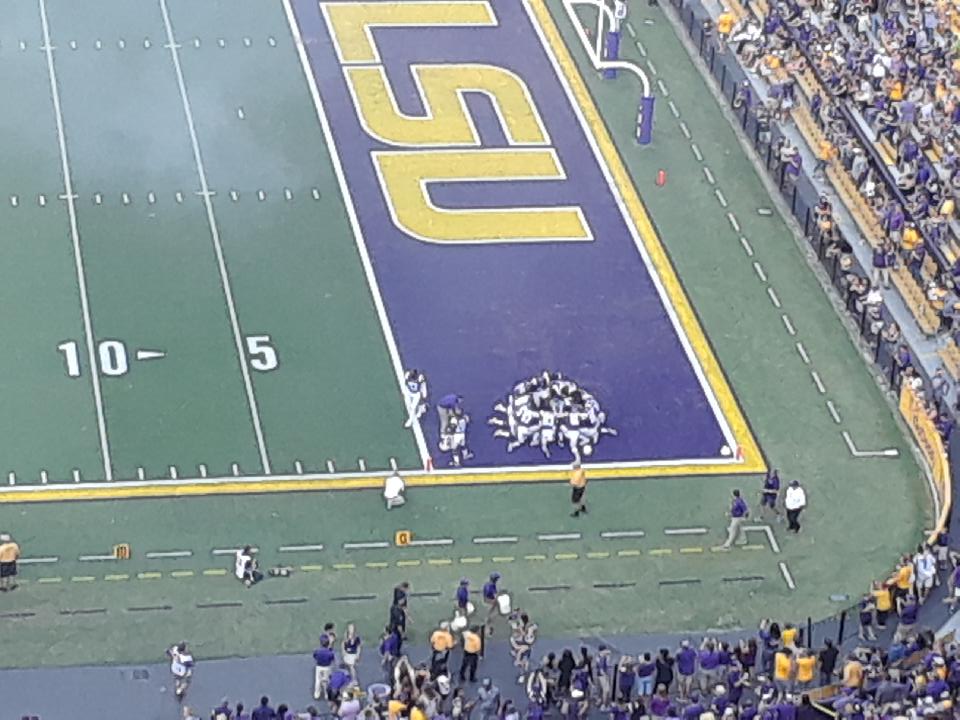 It was homecoming on Saturday night at LSU’s Tiger Stadium (aka “Death Valley”).  That means that the #25 ranked LSU Tigers were supposed to waltz into the stadium and destroy a well-paid ($925,000) but overmatched opponent.  This year’s sacrifice was supposed to be Troy University (formerly called Troy State) from southern Alabama and the Sun Belt Conference.

As the 90,000+ assembled on a warm night in Baton Rouge, Troy University (whose 2,000 or so fans were loud and proud from beginning to end) literally kicked the LSU Tigers’ tails for most of the game and was victorious 24-21.  Troy was up by a 17-0 count in the third quarter and only two late 4th quarter touchdowns by LSU made the final score look close.  Trust me, it wasn’t.

Attending the game on Saturday night, I saw the LSU fans getting fired-up during another outstanding pre-game performance by the Tiger Band.  The team ran onto the field through the North end zone goal posts to a homecoming roar from the crowd.  And then, it happened.

As the team got ready for kickoff on the sidelines, a group of about a dozen LSU players ran toward the South End zone and looked to be getting the crowd fired-up.  No, that was a charade.  As seen in my photo above, the group of players immediately took a knee in the end zone to register some type of protest.  (I am not sure about Saturday’s subject of protest as that seems to change from day-to-day).  The South End zone crowd started to vigorously boo, but then Troy’s team ran onto the field so the “booing” also showered the LSU homecoming opponent as well.

The uninspired play on the field has been a problem since a 37-7 butt-kicking at Mississippi State in game 3.  The team seems poorly motivated, poorly focused, and, for most of this season, a team which doesn’t have a sense of urgency.  After surviving a late scare (at home) by 2-3 Syracuse and being dominated by Troy on Saturday night on homecoming, the LSU football team seems on the verge of a total collapse.

But wait – doesn’t LSU have Top 10 rated recruiting classes almost every year?  Yes, they do!  But having several 5-star athletes with 1-star character doesn’t necessarily translate to success on field.  To my knowledge, LSU has still yet to explain why 12 of their football players were suspended for game 1 versus Brigham Young.  Without sufficient dedication and discipline (both to football and academics), some 5-star athletes come to LSU as pampered high school prima donnas seeking more personal glory, attention and a lucrative NFL future.

However, if the LSU football program begins to flounder, a panic sets-in on the bayou.  Ask former head football coach, Les Miles.  He was fired last year after another lackluster start to the season and currently sits at home collecting $1.6 million every year for the next 6 years (assuming he doesn’t get another head coaching job).  And, after Saturday’s night’s surprising (to some) loss to Troy University, the juggernaut revenue stream called LSU football has again come under the microscope.

Based on what I observed Saturday night from the West upper deck cheap seats, there is a cancer beginning to metastasize at LSU.  It appears as if some players are more focused on bringing the spotlight onto themselves (such as the kneelers) while the Tigers’ well-paid coaching staff is not getting a solid effort from the players, either.  The word “soft” has been used by many (including former LSU All-American defensive tackle Anthony McFarland) to describe this year’s team.

New head football coach, Ed Orgeron, makes $3.5 million annually (with an incredible $12 million buy-out clause) while LSU’s current offensive and defensive coordinators both earn in excess of $1.2 million/year.  After the loss on Saturday night, some enterprising fan has already started a “Go Fund Me” account to try and buy-out Orgeron’s contract.  Good luck with that one.

The next seven games for LSU include SEC encounters at Florida, Ole Miss, Alabama, and Tennessee with home games versus Auburn, Arkansas, and Texas A&M.   Even though only Alabama, Georgia, and, perhaps Auburn, seem to be national powerhouses this season, it is quite possible that LSU (now 3-2) might finish this season with, at best, a 6-6 record.  And, gasp, if LSU should finish with a losing record, the financial hit to current and future revenues from the football program may become significant.

Maybe LSU’s football team, coaches, and athletic director should all take a knee this week…and pray that they can turn this season around before it becomes too late.