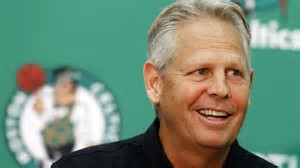 This week, the Boston Celtics made a long-awaited move to add another impact veteran basketball player to a team which climbed into the NBA Eastern conference finals this year, losing to the Cleveland Cavaliers.  General Manager Danny Ainge, a former Celtics star from the 1980’s, pulled off a blockbuster trade by grabbing All-Star guard, Kyrie Irving, from those same Cleveland Cavaliers.

No question, Kyrie Irving is a sure-fire offensive scoring machine who recently proclaimed that he wanted to get away from the Cavaliers’ publicity seeking, coach-killing, crybaby ball hog named LeBron James.  Despite the ego and media hype, James is a terrific player who also now sports three NBA championship rings.

Meanwhile, fans of the Celtics franchise have faithfully proclaimed for the last ten years, “In Ainge we trust”.  Ainge had a reputation as a player as a hard-nosed, sharp-shooting guard who played with a chip on his shoulder every night.  The Boston fans loved the tough-minded Danny Ainge for his team role on the Celtics’ championship teams of the 1980’s.  Ainge then returned to the franchise as its General Manager in 2003 and was fortunate enough to add aging stars Kevin Garnett and Ray Allen along with holdover Paul Pierce as the C’s grabbed another NBA title in 2007.

With that one move, Danny Ainge earned years of patience from the Celtics faithful.  They trusted Ainge when he traded beloved star Paul Pierce and Kevin Garnett to the lowly New Jersey Nets for future draft picks.  He is credited with bringing youthful Butler University coach Brad Stevens as its head coach, and the new coach has already earned NBA Coach of the Year honors.  Ainge, yet again, delivered.

Since then, Danny Ainge has confounded Boston Celtics fans by failing to do much with the extra draft picks except to hoard them.  This offseason, though, Ainge has made his moves.  First, he paid a king’s ransom to sign Utah’s All-Star forward, Gordon Hayward.  Unfortunately, the 6′ 8″ Hayward will not improve the Celtic’s woeful lack of rebounding which came back to haunt them in the conference finals against LeBron James and his Cleveland Cavaliers.

Speaking of Cleveland, Kyrie Irving generally stayed quiet about his increasing unhappiness playing in the huge shadow of LeBron James.  Irving (rightly or wrongly) believes that James receives too much of the credit when the team succeeds and not enough of the blame when the team lost in the finals to Golden State.  Though Irving is a great player in his own right, he hasn’t earned the right to say that he should receive the same “star treatment” that James has claimed.

So, Kyrie Irving waived the “I want out!” white flag this summer, and Danny Ainge floated a boatload of Celtics’ fan favorites in order to grab him:

In sum, the Boston Celtics gained one talented guard in Kyrie Irving, but they gave up four very important pieces in order to get him.  The only way for Danny Ainge and Kyrie Irving to win-over the skeptics of this trade (and I am one of them) will be for Irving to show some heretofore missing on-court and clubhouse leadership skills immediately and finally lift the Celtics past LeBron & Those Other Four Guys.

To accomplish this, Kyrie Irving has some growing up to do.  For Danny Ainge, he has placed his bet and, quite likely, his future employment on Kyrie Irving, too.  Only time will tell if both Irving and Ainge will deliver the desired results.