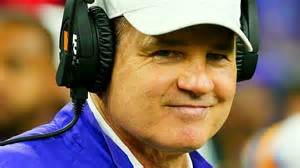 At a hastily called news conference Thursday evening, Ole Miss administrators cited that Freeze offered his resignation as a result of a pattern of personal misconduct.  Ross Bjork, Vice President of Intercollegiate Athletics, is Freeze’ boss and emphatically stated that the head coach had violated the moral turpitude clause of his contract and would have been fired if he had not chosen to resign earlier in the day.

Several news services cited that it was recently discovered that Coach Freeze had logged a one-minute call (on his university-issued phone) to an escort service.  The 47-year old Freeze claims that the call was a “misdial”.  Regardless, Ross Bjork stated during the press conference that “All of us have to be accountable for our own actions” and that “this was the right decision”.  He also said that there was no financial buy-out or settlement associated with Freeze’ sudden departure.

During the five years of Coach Freeze’ tenure, the Rebels accumulated a solid record of 39-25 in the difficult Southeastern Conference-Western Division.  The assistant head football coach and Ole Miss graduate, Matt Luke, has been named the interim head football coach.  Thursday night, the university officials did not want to speculate on a long-term solution.

Hey, Rebels!  There is an obvious head coaching solution who (1) is available right now (2) was one of the best recruiters in college football (3) has relevant recent SEC West experience and (4) would immediately bring maturity, stability and respect back to your football program.  Who???

Why, none other than former LSU head coach, Les Miles, that’s who!  Coach Miles is universally respected, ran a clean (by SEC standards) program, and is chomping at the bit for another chance to coach at a top level program.  After LSU fired him early in the 2016 season due to having yet another balky offense, Les Miles and his agent probably figured he would have another big-time coaching gig in a few months.

After several months and interviews passed, Les Miles is, surprisingly to many, still unemployed.  This man won more football games than any other LSU coach (including Nick Saban) and posted an enviable record of 113-34.  He was loved by players and fans for his incredible enthusiasm and passion but was terminated due to his unwillingness to upgrade his “run on first down, run on second down, and, only if needed, pass on third down” offense.

If LSU fans hated Nick Saban for leaving Baton Rouge and ending-up with the head coaching job at rival Alabama, can you imagine how much fun it would be if Les Miles returned to Tiger Stadium as the head football coach of Louisiana’s next door neighbor, the University of Mississippi?  Different than “Nick Satan”, though, LSU fans would likely give the beloved Les Miles the loudest ovation of his lifetime if he were to return as head football coach of the Rebs.