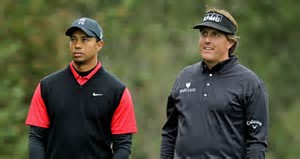 So much for my article yesterday hoping for some Thursday morning rain to delay the start of the 2017 US Open golf championship at Erin Hills, Wisconsin.  As a result, Phil Mickelson will be unable to return from his daughter’s Thursday morning high school graduation in San Diego in time for his 2:20PM tee time.  He has officially withdrawn from the US Open field.

For the first time since 1994, a professional golf major championship will be held without either Phil Mickelson or Tiger Woods in the field.  For television purposes, a televised major championship without modern day golf’s equivalent to Arnold Palmer and Jack Nicklaus in the field could be catastrophic.  In Phil’s case, he should return for the British Open in July and the PGA Championship in August.  For Tiger Woods, nobody knows if he will ever compete at this level again for a variety of reasons.

Adding further to the ratings woes is the fact that golf fans are saddled with the challenge of simply finding the golf tournament on television.  Fox Sports and their fledgling cable sports channel, FS1, will handle the television coverage again this year.  Diehard golf fans like me are stuck with Fox through 2026 as the company shelled out a record $1.1 billion to the United States Golf Association for 12-years of rights to televise this event beginning in 2015.  That’s $93 million per year.  Great for the pockets of the USGA, but, as a viewer, the coverage has been weak.

Viewership has plummeted after the move and, according to reports, Fox Sports has lost tens of millions of dollars in the first two years of this association.  Why?  First, just finding the coverage is difficult.  FS1 is not carried in as many markets as ESPN or Golf Channel, so early round coverage doesn’t build well.  Another reason is that viewers aren’t searching for golf on Fox to begin with.  CBS and NBC/Golf Channel dominate weekly golf coverage so casual golf viewers have to make an effort to find the broadcast on either Fox or FS1.

Then, there’s the on-air coverage itself.  The initial Fox Sports golf announcer team in 2015 of Joe Buck and Greg Norman was just not very good.  Fox Sports wanted Greg Norman to be the next Johnny Miller (NBC) and provide viewers with insightful and spicy observations.  Covering a live golf tournament well is a lot harder than it looks.  Fox parted ways with Norman after only one year and replaced him in 2016 with ABC veteran golf color man, Paul Azinger.  Though 2016’s coverage was somewhat improved, the constant in the equation is Joe Buck.  The son of legendary St. Louis Cardinals announcer, Jack Buck, has yet to learn that  play-by-play for televised golf is an art form where, in many cases, less can be best.

With the loss of traditional fan favorites such as Mickelson and Woods along with another year of question marks about Fox/FS1 coverage, the TV ratings for the US Open may take yet another beating this weekend unless several of the game’s budding new personalities such as Jordan Spieth, Rory McIlroy, Rickie Fowler, and Jason Day rise into the mix.  That’s what I’m hoping for.  And, perhaps this year, without a finger hovering over the mute button.