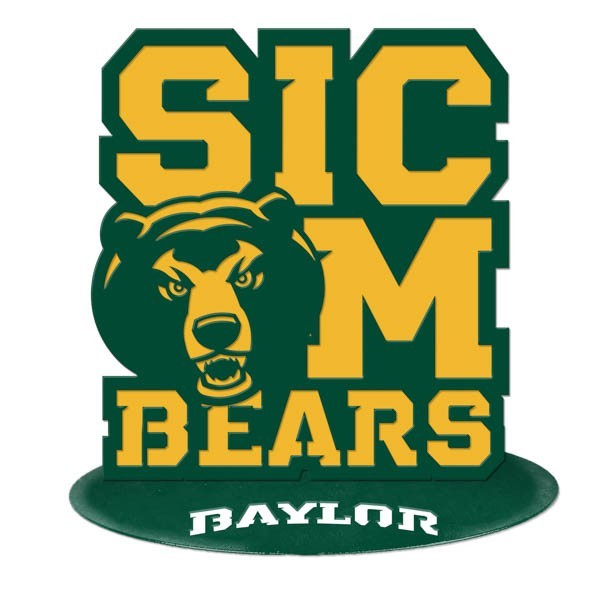 The blueprint for how to take down the Oklahoma Sooners was out there for all to see.  Baylor followed that formula and knocked OU out of the top spot in this week’s SwampSwami.com College Football Top 25 rankings.

In late October, Oklahoma traveled to Lawrence, Kansas and was expected to stomp the lowly Jayhawks.  A funny thing happened that day in lovely central Kansas, though.  KU ran the football right at Oklahoma from the start of the game.  The Jayhawks ran the ball on third down when the Sooners were sure they would attempt a pass.

For three quarters, the Kansas Jayhawks led the heavily favored Oklahoma Sooners.  KU ran out of gas late in the game and Oklahoma rallied to win the game.  Only a final “style points” touchdown in the final minute gave Oklahoma a 35-23 win.  The game was much, much closer than the final score indicated.

The blueprint on how to beat Oklahoma was there for all to see.  One team paid attention to it.

In sunny Waco, Texas, the 8-2 Baylor Bears ran the football right at Oklahoma for the entire game and handed the Sooners their first loss of the season by a final score of 27-14.

Just like Kansas, Baylor ran the ball when OU was expecting a pass and passed the ball when the Sooners expected a run.  Baylor quarterback Gerry Bohanon passed for only 117 yards, but he also ran nine times for 107 more yards and two scores.  Running back Abram Smith (a converted linebacker, by the way) rammed through the Sooners for 148 yards on twenty carries as the Bears racked up nearly 300 yards on the ground.

As the game clock approached zero at the end of this game, the Baylor students rushed the field too early and caused a five minute delay as three seconds remained on the clock.  Oklahoma coach Lincoln Riley was none too pleased to learn that it was Baylor’s coaches who called a timeout prior to the students’ celebration.  The OU coach had to retrieve enough of his players from the locker room for one final play as Baylor kicked a field goal to make the final score a 13-point win.

Baylor coach Aranda said that the final margin of victory might be needed to break a season-ending tie in the event that the Bears finished the regular season tied with Oklahoma or Oklahoma State for the Big 12 title.  Around America, Kansas fans rejoiced to watch OU get a taste of their own medicine after the Sooners had scored a needless touchdown in the final seconds (rather than taking a knee) to finish their football game in late October.

Speaking of Kansas, the Jayhawks pulled off one of Saturday’s biggest surprises by traveling to Austin and beating the Texas Longhorns 58-57 in overtime.

KU led most of this game, but the Horns rallied from 21 points down to tie the game late in the fourth quarter.  In overtime, Texas scored first and kicked the extra point.  Kansas then matched the touchdown, decided to go for a game winning two-point conversion, and succeeded.

It was a gutsy win by a Kansas team which is playing its best for first-year head coach, Lance Leipold.  The Jayhawks won their first Big 12 road game in 13 years (2008).  For the Longhorns and their latest Coach Steve Sarkesian, the loss marked the fifth straight for Texas.  The last time UT lost five games in a row was 65 years ago in 1956.  Ouch!

Elsewhere, the 5-5 Florida Gators’ porous defense allowed a school record 42 points in the first half of Saturday’s home football game.  Who was this juggernaut offense who came to Gainesville to lay that many first half points on the Gators? 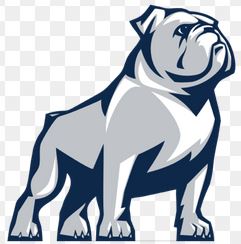 It was none other than FCS (small college division) opponent Samford (now 4-6) from Birmingham, Alabama.  The mighty Bulldogs (whose home football field is named for alumnus and long-time Florida State head coach Bobby Bowden) scored more points on the Gators than their big-school buddies from the west on I-20 in Tuscaloosa did at Florida earlier this season.  Florida hit a few layups and three point shots (just kidding) in the fourth quarter to pull out a 70-52 victory.

Samford’s 52 points scored in this game was the most points ever scored by a small division school against a Top-5 conference opponent since 1978.  Florida head coach Dan Mullen’s hot seat is now sizzling in Gainesville.

Before we check this week’s SwampSwami.com College Football Top 25 rankings, it is time to remind you of how I construct my list.  First, I start each year assuming that the final AP Top 25 from the prior year is still valid as we begin the new season.  If a team was ranked in the top grouping to end 2020 and has not lost a game yet in 2021, I say they deserve to stay in the top group until they drop their first game.  Then, they go into the mix with everyone else.

After that, I look at how many losses your team has and evaluate each game to determine the quality of your team’s “best win” of the season.  There is a premium given to your best win coming on the road versus at home.  Finally, the margin of victory in your “best win” is used to break any ties within that group.

Special note to fans of Ohio State (#15 in my poll but ranked #5 in the AP poll this week) – you can run up the score all you want, but nothing changes the fact that your best win so far in 2021 has come at 6-4 Minnesota. 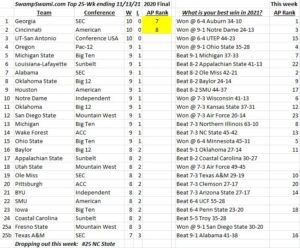