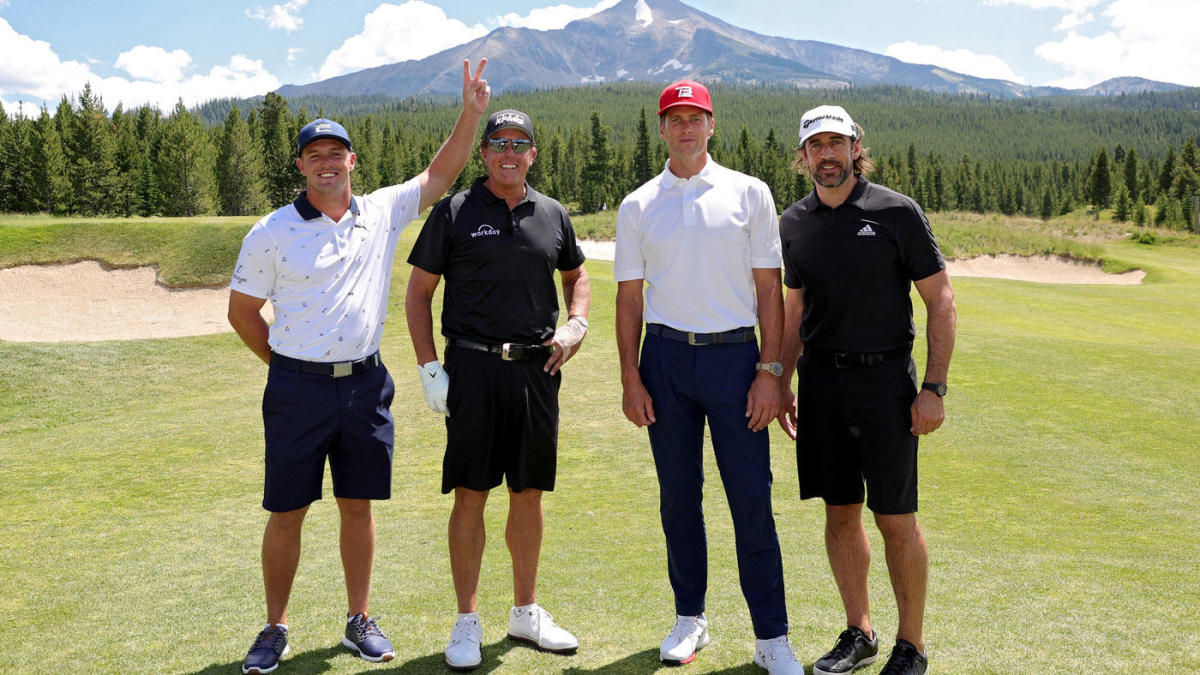 It’s quite possible that you (and most of America) didn’t spend five hours watching the made-for-television golf competition called “The Match” Tuesday night.  This was the fourth in a series of golf competitions on Turner Network Television featuring pairings of two PGA stars and two NFL legends.  This year’s event featured Phil Mickelson and Tampa Bay quarterback Tom Brady vs. the team of Bryson DeChambeau and Green Bay (at least for now) quarterback Aaron Rodgers.

If you missed it, I’ll give you a recap.

First, let’s talk about the golf course.  This year’s event was played at the spectacular Jack Nicklaus-designed Reserve at Moonlight Bay golf facility in Big Sky, Montana.   This incredibly picturesque golf course is located in southern Montana and not too far from Yellowstone Park in northwestern Wyoming.   The golf course elevation is listed at 7,500 feet above sea level.  That’s a full 1.5 miles higher than golf being played here in the bayous of the South.   The tee box views with a vista featuring snow-capped mountains were incredible.

In addition to having less air to breathe at that elevation, the golf ball also travels about 15% further than normal, too.   When you’re talking about golfers like Mickelson and DeChambeau who regularly hit the golf ball over 300 yards, their drive will carry 345 yards (300 x 1.15) at this higher altitude.

The golf course features a unique 777 yard (yes, that’s correct) par-5 hole.  The elevation drops nearly 300 feet from the tee box area down to the green which is nearly ½ mile in distance from the tee!   Unfortunately, neither Phil Mickelson nor Bryson DeChambeau were able to hit the fairway off that tee as viewers were teased that we were about to see a drive of 400 or more yards.  It didn’t happen, but it was fun to watch them try.

The television cameras caught a few of nature’s creatures which golfers normally don’t encounter on golf courses in most of the country.  There was a moose slowly wandering just off the golf course and a lone wolf meandering near one of the golf holes.  Tuesday’s animal star of this television show was a large bear.  Yogi wasn’t looking for a pic-a-nic basket snack, but he did seem fascinated by some of the yellow television cables.   When Bryson DeChambeau decided to venture deep into the brush to look for an errant golf ball, a television commentator startled the golfer by suggesting that he might want to keep an eye out for the bear.   Quarterback Aaron Rodgers was also ribbed about having to play the Bears every season (he didn’t seem to find it funny – more on Rodgers in a bit).  For his part, Mr. Bear never intruded on the golfers, but it made for a few light-hearted moments.

Speaking of the golfers, Phil Mickelson has become legendary in this format for his tongue-in-cheek bragging and taunting of the other players and the announcers during play.  The 51-year old, who just captured his sixth golf major in winning the PGA in May, was on top of his golf game and his needling once again.  He taunted DeChambeau after besting him in the longest drive competition on the front nine saying, “I’m the oldest guy out here, and I still hit the bombs!”  I was fascinated listening to Phil as he gave exceptionally detailed instructions on and around the green to playing partner Tom Brady.  Brady has more Super Bowl titles (7) than Phil has major golf championships, but Tom Terrific was quite receptive to Mickelson’s putting and short game suggestions.  After all, Phil is one of the all-time greats at his sport, too!

Phil’s partner, Tom Brady, once again showed that his golf game was occasionally able to rise to greatness as he regularly rescued Mickelson’s errant drives by putting his own ball into the fairway on multiple occasions.  One particularly fascinating moment came when Tom Brady was asked a question by the golf commentator and gave us a two minute reflection on his work ethic.

Brady related to the audience that he wasn’t considered a young gifted football prodigy.  By applying himself and outworking his competition, he eventually became more successful.  He never looks backward and knows that he is very fortunate to have played with great teammates, too.  It was magical moments to hear the most successful football player of our time speak with such honesty and humility.

On the other side of the competition, Bryson DeChambeau and Green Bay quarterback Aaron Rodgers seemed to be a little mismatched.  Bryson was obviously selected to play in this event because of his ability to hit such long drives off the tee.  He didn’t disappoint, either.  In the early part of the telecast, DeChambeau seemed to be at his best (both on the course and on camera) when he was joking around and playing relaxed.  He put his team into the lead on the first hole with a lengthy drive and a chip-in from off the green for a birdie.  After a few errant tee shots later in the match, though, Bryson’s demeanor was a little less chipper.  It was up to his playing partner to bring this team across the finish line.

My wife walked into the living room and saw Aaron Rodgers with long stringy hair hanging out the back of his golf hat, a scraggly beard, and wearing a dark-colored monochrome golf shirt and shorts.  She said, “Who’s the homeless guy?”  I had to laugh, because she nailed it!

Rodgers, who is still dodging questions about whether he will or won’t report to play football this season in Green Bay due to a lingering personal dispute with team management, seemed like the biggest misfit on the golf course as the round began.  Unlike the other three golfers, Rodgers didn’t come a day early to get ready.  He had visited the course a few weeks ago, though, and seemed to be underplaying how well had been playing golf prior to the event.

Aaron Rodgers seemed nervous on the front nine as DeChambeau was playing well enough to carry the team.  On the back nine, though, it was Rodgers’ tee shots and clutch putting which gave his team a 3-up victory.  Rodgers’ personality may shine on those State Farm commercials, but his shy demeanor probably didn’t help win him a lot of new fans.  Since he makes $37 million per year playing football, Aaron Rodgers probably doesn’t worry whether fans like him very much or not.

The biggest gripe I had about this televised golf event was related to TNT’s coverage decisions.  Camera operators were not able to find where some tee shots landed and even a few balls which had flown onto the greens.  The event, which was already preceded by a 30-minute pre-game show, was then delayed another 15-minutes before the first shot due to unnecessary banter in the television booth.  The commercial breaks went too long (I know – someone has to pay for this), but this year’s event (played in the Mountain time zone) was lucky to have ended when it did as darkness was approaching even with three holes left to play.

Finally, I do have a suggestion for TNT.  Never, ever, ever insert a “silly” golf hole into the competition like you did on the back nine last night.  As Cheyenne Woods (Tiger’s niece and a professional golfer in her own right) stood at one of the tee boxes, she asked the golfers to each select an envelope.  The envelope contained a specific golf club (3-wood, 4-iron, 7-iron, and pitching wedge) which each golfer had to exclusively use from tee-to-green on a difficult par-4 hole.  The players struggled mightily, the hole took forever to play, and it was ultimately halved with a couple of very ugly bogies.

That sophomoric gimmick hole backfired mightily and totally halted the momentum of what had been an otherwise interesting competition.  It was a cringeworthy idea which rarely works during corporate golf outings – even after alcoholic beverages kick in.

Despite a few problems, “The Match” continues to provide viewers with a very interesting insight into the personalities of some our favorite sports celebrities.

I’ll give this fun event a solid “B” last night.

If Brooks Koepka had suddenly appeared at the 10th hole and offered to help caddie for his golfing rival Bryson DeChambeau, I would have adjusted my score for this event and upgraded it to an “A”!