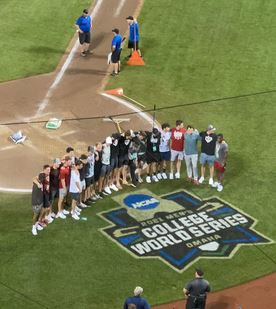 I hate to break this to you, but 2021 is not the year when sports truly returned to “normal” as  this evil pandemic lingers.

Look no further than the 2021 College World Series in lovely Omaha, Nebraska.   The finals will continue tonight as the defending champions (OK, they were from 2019 as there wasn’t a College World Series played in the lost year of 2020) from Vanderbilt take on fellow SEC member Mississippi State.  Vandy leads the CWS 1-0 after taking Game #1 on Monday.

Vanderbilt has a better pitching staff than several major league baseball teams.  The Commodores’ Kumar Rocker and Monday’s Game 1 starter Jack Leiter may be selected within the first ten picks of the next Major League Baseball draft.   The bullpen has been equally effective this season, too.

No doubt about it.  Vanderbilt has a fine college baseball team, a terrific program, and looks to remain a top contender for years to come.

Vandy was given an early Christmas present on Saturday and awarded an unexpected and unearned spot in the championship round due to (ugh) this pandemic which never seems to end and causes mayhem for everyone.  After an outbreak of COVID was discovered within the North Carolina State baseball team on Friday, the NCAA awarded Vanderbilt a spot in this week’s final series without the Commodores having to defeat the college baseball team which had been on the biggest roll at the conclusion of this 2021 season.

After a woeful 4-9 start to their season, North Carolina State had literally morphed into the dragon slayers of the college baseball world coming down the stretch.   The Wolfpack turned their season around and finished as the runner-up in the ACC baseball tournament.  The team was glad just to have an opportunity to be selected for the NCAA’s post-season tournament.

North Carolina State was placed into the Ruston, Louisiana regional.  The Wolfpack went 3-0 in the Bayou State and took down tournament host and #17-ranked Louisiana Tech twice in their home ballpark.  As a reward for winning the Ruston regional, the NC State baseball team was dispatched to the Fayetteville Super Regional to face #1 national seed, University of Arkansas.  The “OmahaHogs” wasted no time and obliterated NC State 21-2 in Game 1 of the best-of-three series.  After that game, Arkansas fans started packing for what most expected to be a likely trip to Omaha and the College World Series the following week.

In Game #2, North Carolina State took an early lead and then held on to beat Arkansas 6-5 and force a deciding third game.  In addition to having 14,000 loud fans on hand to “Call the Hogs” in the championship game in Fayetteville, Arkansas trotted out their previously unbeaten (12-0) ace pitcher Kevin Kopps.  Kopps (who was selected by the NCAA on Monday as the 2021 College Baseball Player of the Year) had been allowing less than one earned run per nine innings on the mound for Arkansas this season.

Yes, things were looking fairly bleak for the Wolfpack.  Don’t tell that to NC State’s baseball team, though.  After such a dismal start to their 2021 season, this team had been fighting for several months just to give themselves a shot at the national title.

Taking a 2-2 tie game into the ninth inning, NC State’s Jose Torres connected for a home run to give the Wolfpack a 3-2 win and send them to the College World Series.  Arkansas fans are still wondering how this could have happened to their college baseball team.

After the first weekend of baseball at the College World Series in Omaha, NC State fans are now wondering what just happened to their team, too.

Upon arriving in Omaha, unranked North Carolina State scored the game’s first six runs to take down #6 Stanford by a 10-4 count.  Next, the Wolfpack played the country’s fourth ranked team in Vanderbilt, the defending champs.  With another sterling performance by freshman pitcher Sam Highfill, NC State kept Vanderbilt scoreless and took a 1-0 win to advance in the winner’s bracket and await an elimination game between Vandy and Stanford the following day.

Vanderbilt staked Stanford a 4-0 lead in the elimination game before scoring two runs in the bottom of the ninth inning to escape with a 6-5 win and set-up their rematch with NC State.

That’s when this never-ending Grinch named COVID showed-up in Omaha to spoil the 2021 College World Series.

Though nobody still knows exactly what happened on Friday prior to the lengthy delay before the first pitch of the game between North Carolina State and Vanderbilt, the Wolfpack took the field on Friday with just ten field players and four pitchers available for the game.  Assuming the normal 35-player roster allowed for college baseball, less than half of the team was in uniform and available to play in the game while the fans and national television audience (like me) were left scratching our heads wondering what was happening.

The Wolfpack cobbled together a patchwork group of players to put onto the field Friday.  A pitcher played first base.  The final four batters in the line-up had a total of 27 at-bats for the entire season.  The starting pitcher was a freshman relief pitcher who had not started a game this season.

Vanderbilt won the game 3-1 with their best pitcher (Kumar Rocker) on the mound.  The win by the Commodores win forced one more game to be played on Saturday afternoon in this double-elimination tournament.   Mississippi State and Texas would also be playing a final game on Saturday night to decide their bracket’s winner, too.

Then we learned what The Grinch called COVID had to say about the College World Series.

“Several players were put into COVID-19 protocol on Friday, which left a depleted roster for its contest with Vanderbilt.  NC State, the NCAA and appropriate parties monitored the situation throughout the rest of the day, and the decision was ultimately made based on the recommendation of the championship medical team and the Douglas County (Nebraska) Health Department.

NC State baseball’s game, scheduled for Saturday against Vanderbilt in the College World Series to determine who would advance to the championship series, has been declared a no-contest by the NCAA due to COVID-19 protocols. The team will not be able to continue in the championship.  The Wolfpack finishes its season with a 37-19 record and was on the cusp of playing for a national title.”

So, the North Carolina State college baseball team wasn’t beaten on the field by an actual competitor.  Though the NCAA and some in the sports media are hiding behind the “COVID rules are still the rules” mantra, there are a number of other factors which have yet to be explained to a very interested public.   Here are a few which come to mind:

Most fair-minded American baseball fans simply want to know the truth about what happened to cause North Carolina State’s baseball team to not even have a chance to play another game at the College World Series.

I find it odd that the NCAA doesn’t seem to care if 20,000 fans (vaccinated or not) pay money to watch a ball game and sit much closer to the person seated next to them than the otherwise healthy 18-21 year old males will get near any competitors while on the field of play.  You may play another verse of “Those are the COVID rules” if you like, but we still haven’t lost our sense of smell (yet).

The winner of this year’s College World Series should have a COVID “kiss my” asterisk placed next to their name, because the hottest college baseball team in the tournament was not allowed a chance to win or lose the title on the field of play.