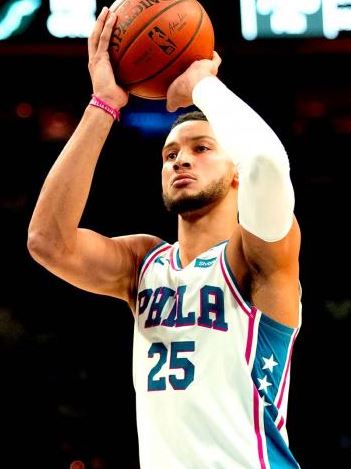 After a barbeque lunch and a terrific Father’s Day afternoon, I remembered to check on the final quarter of an NBA Game 7 Sunday night.  The #1 Eastern seed and home team Philadelphia 76ers was hosting the upstart #5 seed Atlanta Hawks in the (mercifully) last game of their NBA Eastern Division semifinal series.

As to be expected, it was a tight basketball game with every indication that it would go down the final buzzer. With a few minutes left in the game, Philadelphia’s 6’11” point guard (yes, that’s correct) Ben Simmons had the ball on the baseline just a few feet from the basket with a smaller player guarding him.  Simmons spun toward the basket with a fairly clear dunk or dink-shot in front of him.

Instead, Simmons (who only took four shots for the entire game and none in the fourth quarter of any game in this series) dumped the ball to a clearly surprised teammate.  His teammate was fouled and proceeded to miss one of his two free throws.  With the next possession, Atlanta knocked down a three point shot and never looked back in taking a 103-96 victory over the heavily favored Philadelphia 76ers.

With the win, Atlanta moves into the NBA Eastern Division finals against the Milwaukee Bucks (who dispatched the #2 seeded and so-called “Super Team” Brooklyn Nets in their Game 7 on Saturday night).  This means there will not be a marquis East Coast brawl between New York and Philly teams this week.

If you go outside and listen carefully, you still might be able to hear the crying from the executives at Turner Network Television and ESPN!

Those of us who closely follow (or, in my case, followed) professional basketball know, player stats during the NBA’s regular season don’t always equate to their performance in the playoffs.  The true legends of basketball usually perform even better when the chips are down and their team needs them the most. Atlanta’s Trae Young and Philly’s Joel Embiid played up to their star status in this series.

Then there was Ben Simmons of Philadelphia.

Simmons is the personification of why the NBA and college basketball should immediately put an end to the ridiculous “one and done” charade.   Like so many recent NBA first round draft picks, Ben Simmons was a talented “5-star” high school hoopster.  Every year, these highly hyped prospects land in perennial basketball powerhouse colleges such as Kentucky, Duke, and Kansas.  Because these young basketball players are ineligible to play in the NBA until a year after high school graduation, many play for just one season in college and then, like clockwork, enter the NBA draft.

For every one-and-done college player such as Karl Anthony Towns (Minnesota Timberwolves) who finds success in the NBA, there are other high draft picks (remember Cleveland’s first round dynamic duds named Noah Vonleh and Anthony Bennett?) who struggle in the top pro league.

In Ben Simmons’ case, he smartly opted not to attend one of the glamour colleges for his one and only year in college basketball.  Instead, he showed-up in Baton Rouge to play for LSU back in the 2015-2016 college basketball season.  Since the Tigers’ basketball program had been on a downturn for years, many observers (me, included) were surprised by Simmons’ decision to choose LSU and become the program’s biggest recruit since Shaquille O’Neal.

In retrospect, this all makes a lot more sense.

If Ben Simmons’ basketball weaknesses (shooting and confidence in his shooting) had been exposed at another more competitive university (like Kentucky or Duke), Simmons’ NBA draft value may have decreased.  By playing for a mediocre basketball program (as LSU was at the time), the athletic Simmons was allowed to showcase his ability to run the court with the ball in his hands while scoring most of his points on fast breaks and shots taken near the rim.  Ben Simmons could have been a flop trying to play for a methodical offensive team such as Duke or North Carolina.

LSU improved to an 18-13 season in Ben Simmons’ one and only season as he averaged 19 points, 12 rebounds, and almost 5 assists per game for the Tigers (who were not selected to play in the NCAA tournament that year).

Simmons apparently had very little interest in his academic pursuits at LSU, either.  After getting past the NCAA’s minimum GPA of 1.8 for his first (fall) semester at LSU, Ben Simmons quit school immediately following the Tigers’ basketball season ended in the middle of the spring semester.  With NBA scouts drooling over the possibility that Ben Simmons might be the second coming of Magic Johnson, he already knew that a big payday was coming his way soon.

While his teammates on the LSU basketball team toiled for years, “Designated star” Ben Simmons floated into LSU for his obligatory eight or nine months on campus to accomplish exactly what he wanted.

As the first overall pick by the Philadelphia 76ers in the 2016 NBA draft, Ben Simmons became a very wealthy young man.  He played the college “one-and-done” game like a Stradivarius by finding a school which was willing to showcase his basketball skills and ask little in return.  Though Simmons’ shooting skills were mediocre even by college standards, most NBA teams fantasized about having a 6’11” gazelle capable of bringing the basketball up the court on a fast break.

Like many other young basketball players, his shooting deficiencies could be improved with additional practice and training, right?

After missing his entire rookie season with a broken right foot, Ben Simmons has just completed his fourth full year on the court in Philadelphia.

Through four regular season campaigns, Simmons is averaging 16 points per game, 8 rebounds per game, and 8 assists per game.  In the NBA playoffs, though, his point production drops to just 14 points per outing.

Those scoring statistics are extremely misleading.

Though Ben Simmons makes 56% of his shot attempts, most of his points come from fast break dunks or within 3 feet of the basket.  His scoring range is more suitable for a center or forward camped-out under the basket but not for a point guard.

Since Ben Simmons (as of this writing) plays the point guard position in Philadelphia, his inability to shoot the basketball from 15 feet or more from the basket makes him an offensive liability.  During any seven-game playoff series, your opponent can and will exploit a glaring weakness (such as Simmons’ inability and unwillingness to shoot the basketball) to its advantage.

For his first two seasons on the court in the NBA, Ben Simmons didn’t even try to attempt a 3-point shot.  After Sunday’s loss to Atlanta, he has yet to attempt a single 3-pointer in the playoffs during his four year career.

The Atlanta Hawks also exploited yet another shooting weakness of Ben Simmons.  His free throw shooting in the seven game series was simply atrocious as he made just 15 out of 45 attempts.  For the Sixers’ two playoff series this year, Simmons’ 34.2% free throw conversion rate was the worst shooting percentage in NBA history (yes, even worse than Shaquille O’Neal and Wilt Chamberlain).  His poor free throw shooting cost his team at least two wins during the Atlanta series.

Ben Simmons’ shooting has not improved in four complete NBA seasons in Philadelphia.  For reasons which I’ll never understand, the team (apparently still in love with his potential) extended Simmons’ contract last season (all guaranteed money, by the way) at about $35 million per season for another four years!

What do they say about a fool and his money?

It is quite possible that the Atlanta Hawks may have just ended the “Ben Simmons Experience” in Philadelphia.

At 6’11”, Simmons has proven that he is not a good enough shooter to play the point guard spot –especially during a playoff series.  If he remains in Philadelphia (which I doubt), he must be moved to a forward spot and learn to play in the low post with center Joel Embiid (the true star player on the 76ers).

With all of the guaranteed money in his new contract, Ben Simmons does not have to improve his shooting to keep his paychecks rolling in.  He is wealthy beyond his wildest expectations – regardless of whether he is stays in Philly or is shipped to another team willing to spend too much money for a player who doesn’t care to enough to improve his game.

Ben Simmons was never going to be the second coming of Magic Johnson.  Magic was always a leader at heart and worked hard every year to improve his own shooting weaknesses.  Comparing Simmons’ “potential” to Magic Johnson was all in the imagination of those who somehow figured that Ben would mature once he became a professional basketball player.

Hey, Philly fans!  You’ve been “used” by Ben Simmons – just like LSU was.

At least, the “Ben Simmons Experience” left the Pete Maravich Assembly Center in Baton Rouge after just one mediocre season.  LSU basketball has thrived in the post-Ben Simmons era.  The same could happen in Philadelphia soon, too.

Ben Simmons has proven one thing to be true.  What you see is what you’ll get.