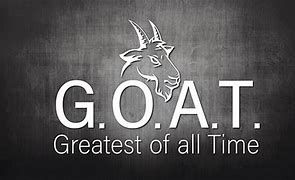 No, this story isn’t going to be about a visit to my local petting zoo!

Over the weekend, fans of men’s professional tennis observed one of the greatest individual efforts in recent history.

In the semifinals of the French Open, 34-year old Novak Djokovic rallied to defeat his longtime rival, Rafael Nadal.  In Sunday’s finale, “The Joker” would fall two sets behind to young Greek tennis star, Stefano Tsitsipas, steadied himself and rallied to sweep the final three sets to win his second French Open title.  It was his 19th major championship in professional tennis.

Some of this morning’s sports headlines are now proclaiming Novak Djokovic to be the greatest men’s tennis player of all time!

Shouldn’t his rivals Rafael Nadal or Roger Federer (both with 20 major championships in tennis) be a big part of that discussion?  What about earlier tennis legends such as Pete Sampras or Sweden’s Bjorn Borg?  During their eras, each were quite dominant players, too.

By what measure to you declare someone “The Greatest of All Time” (or the term “GOAT” as seems to be fashionable these days)?

Every year, there are more and more sports reporters inventing stories to say this person or that team is the greatest of all time.

A few athletes during my time had the audacity to proclaim it for themselves.  Boxing’s Muhammed Ali told everyone “I am the greatest!”  Nearly 50 years have passed, and he may, indeed, still be the best heavyweight boxer ever.   Fans of Rocky Marciano, Mike Tyson, or George Foreman may wish to enter that ring of discussion with you.

Professional wrestler Ric Flair is now 76 years old, but he claims to be the greatest wrestler of all time, too.  Depending on your source and who you ask (such as Flair himself), he has held no less than 16 and up to 25 World Heavyweight Championship belts.  No matter how you count them, that’s a lot of bumps and bruises inflicted (and received) over his 40-year career.

Wrestling fans of the legendary Bruno Sammartino, Hulk Hogan, “Macho Man” Randy Savage, and John Cena may wish to disagree with you, though.  Their favorite wrestler was, to them, the greatest of all time.

This “Greatest of All Time” discussion in any sport can generate any number of opinions.

Golfer Jack Nicklaus still holds the record with 18 major golf championships during his brilliant career.  Wouldn’t it have been fun to watch a match pitting Big Jack and Tiger Woods when they were both in their prime?   While we’re in the “Wayback machine”, Bobby Jones and Arnold Palmer would love to join that group and play as a foursome!

In today’s NBA, there are some who make the case for LeBron James to be considered the greatest basketball player ever.  Those who watched Michael Jordan in his prime vigorously take exception to that notion.  I remember how dominant Boston Celtics’ center Bill Russell was during the 1960’s as his Celtics teams won eleven NBA championships.  However, legendary centers such as Wilt Chamberlain and George Mikan were more talented on offense than Russell.

Was there ever a greater college basketball player than LSU’s Pistol Pete Maravich?  In a record which remains over 50 years later, Pete averaged over 44 points per game during his college days.  A few years later, UCLA’s 7’2” center Lew Alcindor (who later changed his name to Kareem Abdul-Jabbar) absolutely dominated college basketball during his time on the West Coast.  The University of Houston’s Elvin “The Big E” Hayes deserves a mention as does North Carolina State’s high flying David Thompson.  Anyone who watched Larry Bird or Magic Johnson play college basketball might argue for them to be in the discussion as they each changed the sport in different ways.

Baseball’s GOAT discussion is much more difficult to get a consensus.  Since the sport has been played professionally for more than a century, most historians would put Babe Ruth at or near the top of any baseball GOAT list.  How to you ignore Braves’ legend Hammerin’ Hank Aaron whose 755 career home runs should still remain as the most ever as I believe home run stats from the steroid era should be deleted.  Willie Mays of the Giants may have been the greatest overall athlete to play baseball, but Ted Williams was possibly the best pure hitter in baseball history.   Some guy named Cy Young was a pretty darn good pitcher in his day, too!

For purely college football, did you ever see a more dominant running back than Earl Campbell of Texas?  Oh yeah, Herschel Walker of Georgia was terrific and Auburn’s Bo Jackson was known to run over a few defenders, too.  Was there a more elusive runner than Barry Sanders of Oklahoma State?   Jim Brown of Syracuse was simply dominant at running back.  Florida quarterback Tim Tebow would just as soon run you over as throw a touchdown pass.  Navy quarterback Roger Staubach and Stanford’s John Elway were a joy to watch lining-up behind center.  Jim Thorpe was the most dominant football player during his years in college.

In professional football, Tom Brady’s record number of Super Bowl appearances (10) and wins (7) may not be broken anytime soon (if ever).  As great of a quarterback as Brady has been in New England and now Tampa Bay, Chicago Bears fans might nominate running back Walter Payton for the GOAT unless they should decide to put hard-hitting linebacker Dick Butkus at the top.  Green Bay and Philadelphia defensive lineman “The Minister of Defense” Reggie White should get some votes as would Pittsburgh Steeler defensive tackle “Mean” Joe Greene.  San Francisco’s Ronnie Lott hit wide receivers and running backs as hard as any defender in modern history while his gifted wide receiver teammate Jerry Rice never seemed to drop a pass thrown his way during his incredible career.

Even the NFL’s own list of their “Top 100” players of all time will need to be adjusted soon as time passes and the current generation of great players retire.

That’s what makes these GOAT discussions both interesting and futile.

Would soccer legend Pele still be as dominant if he was playing in today’s era?  Would Boston Bruins hockey great Bobby Orr be just good now as he was during the 1960’s and 70’s?   By contrast, wouldn’t it be fun to see 1860’s golfing legend Old Tom Morris tee it up over 160 years later in July’s British Open using today’s modern golf clubs and balls?

How interesting would it be to watch any current NBA team matched-up against a bruising defensive team such as the “Bad Boys” Detroit Pistons of the 1980’s.  Likewise, it would be fun to have seen how Earl “The Pearl” Monroe, Walt Frazier, Willis Reed, and their 1970 New York Knicks team would compete against a modern team such as the 2017 Golden State Warriors.

Creative video game developers have seized upon questions like we have just posed.  Their companies have made a mint trying to satisfy consumer demand by inventing similar “What if” scenarios for fans of nearly every sport about athletes and teams from different eras.

As for me, I prefer to simply take in the sights and marvel while watching a sport being dominated by one particular player or team.  Those memories will make for some mighty interesting discussions with friends and family as the years keep rolling by.