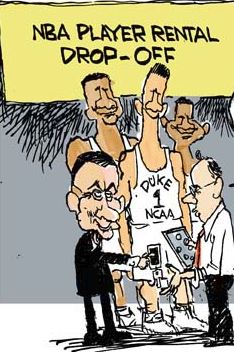 As the number of teams in the NCAA men’s basketball tournament continues to dwindle, a growing number of individual players are now declaring their intention to enter the National Basketball Association draft to be held in late June.

Here’s a sports headline from today (and one of many like it from around the US) – “University of North Carolina freshman big man Day’Ron Sharpe will enter the NBA draft. The 6-foot-11, 265-pound Sharpe announced his decision after averaging 9.5 points and 6.9 rebounds per game – coming off the bench.”

Sharpe said, “I feel that I’m now ready for the next level. I’ve made it this far and there’s no reason for me to stop now!”

Really?  This young man can’t even earn a starting role on his own college basketball team!  He had four points and three rebounds in UNC’s first round exit against Wisconsin last week.

Who told this young man that he is ready for the next level?

Around the country, multitudes of young basketball players are signaling to NBA teams “Hey, look at me!” and inviting scouts to take a closer look and let players know what their chances of being drafted are.

Last year, 205 college players declared themselves to be “draft eligible” by the NBA prior to the 2020 NBA draft.  Since the NBA has only 30 teams and two rounds in its annual player draft, that meant just 60 happily employed new professional basketball players.  The remaining young athletes found themselves scrambling for a chance to play in the NBA development league (G-League) or, perhaps, overseas wherever they hope to earn a paycheck by playing basketball.

Why do college basketball players have to declare themselves to be eligible for the NBA draft at all?

This is a very unique and bizarre way of courtship between the NBA and hundreds of basketball players whose dream is to play in the NBA.  With only 400 spots available on the rosters of NBA teams, most college players will never take the floor to play in basketball’s big league.

As the game is configured at the moment, below is a summary of what happens if a college basketball player (who isn’t already a senior without any additional college eligibility remaining) wants to leave school early and have a chance to play in today’s NBA:

In other words, this entire procedure is left up to a 19, 20, or 21 year old young person to undertake at their own cost and risk.  The young man must identify and trust (cough) an NBA agent who is only interested in his own cut of the player’s future earnings.  Then, the agent and player set out on a journey to see which NBA team(s) would want to interview the player and have a brief tryout.

All of this is happening while the student-athlete is supposed to be taking college classes during the spring semester.  Though we can surmise that the vast majority of the NBA-bound athletes really don’t have a serious interest in their college education at this point, there are some who do care about taking advantage of their educational opportunity.

It all sounds terrific – if you’re the NBA.

The onus is placed entirely upon the prospective employee to initiate this odd courtship dance.

After a few months of travel, tryouts, and interviews, the college basketball player then sits and waits.  If the player’s name is not called in late June’s draft during Round 1 or Round 2, the value for his basketball services dwindles quickly.   Here’s what is at stake:

Undrafted free agents – If a player makes the NBA squad, they will receive the NBA minimum salary ($838K).  If they make the franchise developmental G-League team, the minimum pay is $125,000 for the 5-month season.

I just understand don’t why these student-athletes cannot remain in classes for the entire spring semester and make the NBA franchises do some or most of this legwork.  Aren’t the professional basketball teams going to benefit the most from finding these future players?

Answer:  Because NBA will resist any changes because they feel they don’t have to.

The NBA minimizes its own expenses by keeping this current process intact.  By having a centralized annual player “combine”, the league’s potential professional players arrive at a single location (at the agent’s or player’s own cost) for workouts and interviews prior to the annual NBA draft.

Let’s contrast this to our own interview and hiring experience.  You are a new college graduate and are asked to come for a job interview with Company “Z” in another city.  The company (historically) will offer to pay for all or the majority of your expenses associated with the job interview regardless of whether you are hired by the company or not.

The NBA does not.

Then again, this professional basketball monopoly has no true incentive to spend any more money on the hiring process than absolutely necessary.  It’s that pesky economic term of the law of supply and demand.  The NBA totally controls the “demand” side of this equation.

Here’s a novel idea.  Most parents believe it would be far better for their college student-athletes to stay in school each spring, complete the coursework for the spring semester, and then require the NBA to approach these potential professional basketball players at the local university for a private tryout and interview (all at the NBA’s expense).

At least 45 days prior to the NBA draft (which usually occurs in late June), each NBA team can provide the league’s home office with a list of the team’s top 60 possible draft choices.  Each of the 30 NBA franchises will obviously have some overlap in coveting certain players near the top of each list, but they won’t agree entirely.  Let’s say that a total of 100 players are identified by those 30 NBA teams with each player receiving up to a maximum of 30 possible votes and some players only receiving one vote.

The NBA could provide this composite list to every player identified along with the number of votes each player received.  The ones garnering the most votes will know that they are likely will have a future opportunity to play ball in the NBA.  The student-athletes with just one or two votes might wish to consider staying in school.

By June 1 (about three weeks before the NBA draft), any identified player on the composite list would be required to sign a “letter of intent” signally their willingness to be drafted by any NBA team calling their name during the first or second round.   In that manner, each NBA team would be assured that any player being drafted has already agreed to negotiate a contract to play professional basketball in the Association.  Anyone not signing and returning the letter of intent will not be eligible to be drafted.

At some point in the future, it would be nice to hear basketball student-athletes talking about their upcoming final exams in spring instead of who just declared for the upcoming NBA draft!