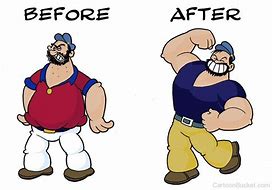 In case you missed last week’s return to action on the professional golf tour, much of the talk coming out of Colonial Country Club in Fort Worth centered on one particular golfer.

No, not the winner!  Though Daniel Berger survived a playoff to win his third PGA event, the BIG talk of the weekend was about the guy who finished tied for third place.

The focus of the week seemed to be in providing significant coverage to the PGA Tour’s new cartoon character.

The 26-year old golfer has been quite successful over his four years on the PGA Tour.  He already has collected five wins on the big stage and has played for the United States in both the 2018 Ryder Cup and the 2019 President’s Cup.   That’s a terrific start for a young golfer.

Bryson DeChambeau already had no problem in becoming one of the most recognizable golfers on the men’s tour.  A physics major while at Southern Methodist University, Bryson tinkered with his golf clubs and swing in college.  Taking a unique scientific approach, he decided that it made more sense that all of the irons in his golf bag should be the same length (a 6-iron in his case) instead of having clubs of slightly increasing length that have always been considered standard.

When standing over the golf ball, you cannot tell whether DeChambeau is hitting a wedge to the green or a 4-iron.  His stance and set-up are identical.

I tried a set of those irons (made by Cobra) at a local golf store.  Though it feels very comfortable hitting long-irons (4, 5, and 6) with a shorter shaft, the opposite is true when you’re now hitting a wedge, 9-iron, 8-iron, and 7-iron with a longer-than-normal shaft.

While at SMU, young Bryson DeChambeau put his unique set of “one-length-fits-all” irons to the test.  He had an incredibly successful career as a college golfer in winning both the NCAA individual title and the US Amateur as a senior in 2015.  That’s a feat which had only been accomplished by four other golfers – Jack Nicklaus, Tiger Woods, Phil Mickelson, and Ryan Moore.

DeChambeau has worn a unique “Ben Hogan” styled golf cap ever since high school.  Remember that another famous golfer who played at SMU wore a similar styled cap – the late Payne Stewart.

So as he entered the PGA Tour in 2016, Bryson DeChambeau, with his unique golf clubs and knowledge of mathematics and physics, had one of the most unusual resumes on the PGA Tour.

Unfortunately, his overly analytical reasoning on the golf course have led to allegations of slow play.   His initial success on the men’s golf tour may have helped to grow his popularity, but his continued slow play has been called-out by many of his fellow PGA tour professional golfers.

In addition to his unique set of one-length golf irons, Bryson DeChambeau has also tinkered with his putting stroke over the years, too.  When he came on the PGA Tour in 2016, he putted standing aside from the ball.  This “side saddle” approach was utilized by PGA legend, Sam Snead, toward the end of his lengthy career.

Unfortunately, DeChambeau’s inability to sink enough putts early in his professional career led him into another change.   He changed his putting stroke to a very uncomfortable looking one where his left and right arms extend nearly straight from his left shoulder to the ground.

In 2020, Bryson is ranked #27 in putting on the PGA Tour through last week’s Charles Schwab Challenge in Fort Worth.   That’s pretty good, but there is room for improvement.

Instead, Bryson DeChambeau has opted for improving another facet of his golf game the past year.  The results have been quite impressive!

One year ago in 2019, Bryson DeChambeau ranked #35 on the PGA Tour in driving distance with a not-too-shabby 302 yards per drive.  The longest player in 2019 was Cameron Champ (319 yards) followed by Rory McIlroy at 314 yards per tee shot.

This season, Bryson DeChambeau is now ranked #1 on the PGA Tour with an average driving distance of nearly 324 yards.  That is an additional 22 yards off the tee in just one year!

A lot of hard work in the gym and a special diet designed to put more weight onto his 6’1” frame.  DeChambeau has increased his weight from a rather “normal” 190 pounds a few years ago and has worked his way up to nearly 240 pounds today.

More impressively, 35 of those added pounds have come during the past year alone.  This guy now looks more like an NFL linebacker or tight end than a PGA Tour golfer.

Last week, “Beefy” Bryson DeChambeau averaged over 340 yards per drive in Fort Worth.  That is almost 50 yards longer than the PGA Tour average.

After the tournament ended, DeChambeau admitted it was his intention to bomb tee shots over the corners of Colonial Country Club’s many dogleg par-4 holes.

“I wanted to make those obsolete,” he said.

Mission accomplished, big fella!  Though he didn’t win the golf tournament last week, DeChambeau’s prodigious drives off the tee have put him back into the sports headlines again.

Bryson’s new “Bomb, pitch, and putt” philosophy has renewed the calls for immediate changes to reduce the increased distances after technology has altered both golf balls and golf clubs.

Sure, there were a few golfers like Arnold Palmer (with his legendary forearm and hand strength) and Jack Nicklaus (an accomplished overall athlete who was physically bigger and stronger than most tour players of his day) who took full advantage of their physical gifts on the course.

More recently, Tiger Woods’ training regimen is legendary (though secretive), and Rory McIlroy looks like he could be a relative of Popeye-the-Sailor.

Why shouldn’t Bryson DeChambeau be permitted to do the same thing today?

Guess who is in the field again this week at the relatively short (and very tight) golf course at Hilton Head Island, South Carolina?  Yes, “Buff” Bryson DeChambeau will be there to see if he can take down another classic golf course with his newfound power off the tee.

As proven again last week, golf still remains a “Drive for show and putt for dough” game.  If “The Scientist” of the PGA Tour has his way, “Wile E.” DeChambeau is just one more new gimmick away from improving his putting and outsmarting all of his golfing peers once and for all.

In the meantime, it will be interesting to see how many of the other PGA golfers start hitting the gym a little bit more and learning to like their spinach!