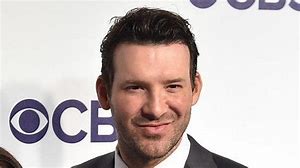 The former Dallas Cowboys quarterback-turned-CBS Football analyst just signed a new contract to continue in the booth with Jim Nantz for a whopping $17 million per year.

$17 million per year to talk about NFL football is nearly double the average pay he received as quarterback of the Cowboys while ducking 300-pound linemen trying to take him down every play.

He seems to be the ultimate “right place, right time” guy.  Coming out of high school in Wisconsin, Tony Romo made the all-state team and also played basketball, golf, and tennis.  Though he wasn’t a highly recruited college quarterback, Romo signed to play with Eastern Illinois University (Division 1-AA – now the FCS division).

Despite such great success in college, Romo wasn’t drafted by a single NFL team in 2003.

However, his football career at Eastern Illinois was noticed by another well-known graduate of the same school, Sean Payton.  At the time, Payton (who is currently the head coach in New Orleans) was the quarterback coach for the Dallas Cowboys.   Sean Payton brought Romo into training camp, and Romo signed a free agent contract (for $225,000 annually) with the Dallas Cowboys.

How’s that for good timing?  Wait, it gets better.

In Romo’s first season in Dallas, he earned the third string spot behind two other less-than-stellar NFL quarterbacks.  With apologies to Cowboys fans, Quincy Carter (who was later kicked out of the NFL for recurring drug problems) and a former professional baseball player, Chad Hutchinson (who had a 2-7 record as an NFL starter) were the two quarterbacks in Tony Romo’s way to the top.

Tony Romo quickly progressed up the ladder and grabbed the Dallas Cowboys’ starting quarterback job in just a couple of years.  He played his entire career for Dallas and earned NFL All-Pro honors four times.

Unfortunately for Dallas Cowboys fans, the Romo years were filled with several winning seasons but without a return to the Super Bowl, either.

By the time he retired from the Cowboys at age 37 after the 2016 season, Romo’s final contract with the Dallas Cowboys had climbed to $18 million per season.

Tony Romo has always been a hit with the ladies, too.  He had dated high profile Jessica Simpson.  During that time, Cowboys fans called her “Yoko Romo” as Tony’s on-field performance fell off.  He married Candace Crawford (a former Miss Missouri winner) in 2010, and the couple now has three sons.

The likeable Romo was offered a contract (valued at $4 million per year) to join CBS’s Jim Nantz in the booth beginning in 2017 as the color analyst for NFL football games on the network.  With his recent NFL knowledge of the game, Romo gained immediate recognition for his ability to predict key plays which were being run by teams on the field.

Jim Nantz had previously been paired with another former NFL quarterback, Phil Simms, for nearly 20 years.  Simms, still under contract to CBS, was moved into the network’s pregame show as the network took a chance with Tony Romo in the analyst slot.

Just three years into his broadcasting career, Tony Romo’s timing worked magic for him yet again.

ESPN’s Monday Night Football broadcasting team has been a mess for years.  Relative unknowns Joe Tessitore and former LSU and NFL defensive tackle Anthony “Booger” McFarland have been less than a well-oiled machine in the broadcast booth for the network’s most valuable property.

Tony Romo’s name was floated as a possible replacement at ESPN.  But so was another big name, Peyton Manning.

CBS sensed a possible bidding war for Tony Romo’s services.  The network will handle this season’s Super Bowl game, too.

Last week, Tony Romo signed a contract extension with CBS Sports for a whopping $17 million per season for the next several years.

How about that for good timing?

For now, the duo of Jim Nantz and Tony Romo seems to have a good chemistry in the booth.  The hard-working Nantz (who also handles golf telecasts for CBS as well) may have his hand outstretched soon seeking more pay for his job, too.

Personally, I find Romo a little hard to take on the NFL broadcasts as he tends to talk too much for my taste.  Then again, he is working with Jim Nantz, who is smart, competent, but a little bit vanilla at times, too.

Romo comes across as having fun in the booth, and he apparently has plenty of fans in the higher echelon of the television networks, too.

Whether Tony Romo’s talent in the television booth actually translates to increased ratings for CBS is debatable.

Regardless of my opinion, Tony Romo’s combination of impeccable timing and talent has done it again.  He is now the highest paid television analyst in sports.

Once again, it’s good to be Tony Romo.