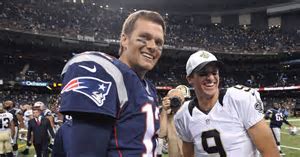 Quick!  Somebody needs to call an ambulance for the NFL right now, because the football league’s recent television ratings improvements will likely end beginning this weekend.

With legendary NFL quarterbacks Tom Brady (New England) and Drew Brees (New Orleans) knocked out of the AFC and NFC playoffs in Round 1 last week, your SwampSwami predicts that many football fans will find something else to do beginning this weekend.

The New England Patriots 20-13 loss (at home) to Tennessee last Saturday wasn’t exactly unexpected.  The NFL’s defending champions (who finished 12-4 in the regular season to earn a 3rd place AFC finish) have been offensively-challenged all season.  Though the 42-year old Tom Brady still has great talent, his team lacked enough skill players at the wide receiver spot most of this season.

If you remember, the team took a chance on Antonio Brown after making a deal with the Raiders early in the season.  Alas, Antonio Brown’s off-the-field personal issues forced New England to cut him after just one game.  Both injuries and a lack of NFL caliber talent at wide receiver plagued Brady’s effectiveness for most of this year.

New England was still ninth in the NFL in passing (260 yards/game) this season, but nobody other than 33-year old glue-fingered Julian Edelman averaged more than 50 yards per game receiving for the Patriots.  Edelman caught 100 passes during the regular season for 1117 yards, but the next best receiver for New England was running back James White (72 catches but for only 645 yards).

Down in the Crescent City, the New Orleans Saints finished the year with their second straight 13-3 season.  Due to some tiebreakers, the Saints (like New England) were the third seed in the NFC playoffs and hosted a wild-card game last Sunday.   The Minnesota Vikings came to the Superdome and sent the Saints out of the playoffs with a 26-20 overtime win.

New Orleans’ two-year regular season record of 26-6 is the best in the NFL.  This season’s first round playoff loss really stung this team and its loyal legions of fans.  Minnesota exploited weaknesses of the Saints (both on offense and defense) and forced the home team to rally just to get into overtime.   The Saints’ normally-prolific offense never touched the ball in overtime as the defense allowed the Vikings to score a touchdown on the opening series.

This season’s New Orleans team (led by soon-to-be 41 year old quarterback, Drew Brees) appeared to have a great chance at bringing home a second Super Bowl trophy.  This was the 10th anniversary of the Saints 2009 championship season.  Unfortunately, the Saints, like the Patriots, have been dumped out of the playoffs with hardly a whimper.

Drew Brees came back from a serious thumb injury on his throwing hand to lead the Saints into the playoffs as the team won six of the last seven games before the Vikings ended their season on Sunday.

Both Brees and Brady are now considered free agents.  Both quarterbacks had “good” seasons by historic standards, but neither has the downfield passing arms that they possessed ten years ago.

That’s why you don’t see many 40-year old quarterbacks in the league, too.

For the Saints, it is obvious that the team missed running back, Mark Ingram (now with the Baltimore Ravens) much more than initially thought.  Ingram gave the Saints offense the “thunder” to Alvin Kamara “lightning” quickness.  Both runners forced defenders to respect the running game, and, thus, gave Drew Brees more time to find open receivers.

In Sunday’s loss to the Vikings, the Saints’ running back tandem of Kamara and newly-acquired Latavius Murray combined for only 42 yards on twelve carries.  For most of the season, the Saints’ running game faded in importance.  The Vikings tightened their defense and forced Brees into a number of third-down situations.  It worked.

What’s next for Tom Brady and Drew Brees?

Though I personally think Brady should retire in New England and remain a healthy (and wealthy) man, it’s possible that he might want a change of scenery and move to a warmer climate.  The Chargers (now in Los Angeles, lest we forget) are showing interest in Brady and have some great wide receivers.  With terrific weather and a competitive team, this is the kind of move that might interest Tom Brady.

With all of the possible positives, there’s also the chance that Brady might get injured playing behind a porous offensive line in another NFL city.

I think it’s 50/50 on whether Brady will take one last chance to play in another city.

For Drew Brees, his fortunes have been tied to head coach Sean Payton for most of his career.  Before the Dallas Cowboys filled their head coaching spot yesterday with former Green Bay coach Mike McCarthy, Payton’s name was being tossed-around as a possible candidate in Dallas.

Brees will certainly get offers for his quarterbacking services, but he wouldn’t be playing for a team which had a better record than the Saints for the past two seasons, either.

I think Drew Brees might be interested in coaching (whether college or professional) once his playing days are done.  Sticking with his coaching guru, Sean Payton, makes the most sense for Brees.

I would be shocked if Drew Brees left the Saints unless Sean Payton bailed-out first.  With several NFL head coaching and GM jobs open, Payton may hear some serious overtures soon.

In the meantime, get ready for the NFL playoffs to continue this weekend without the two “Killer B’s” (Brady and Brees).  I can’t remember the last time the second round of the NFL playoffs didn’t have either Tom Brady or Drew Brees leading a team onto the field.