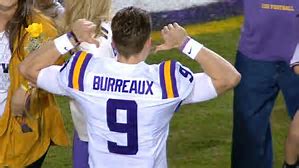 Though the regular season has ended with three 12-0 teams (Clemson, Ohio State, and LSU) atop the SwampSwami.com College Football Top 25 for 2019, the next question is “Who will be the four top BCS teams playing for the national championship?”

By the end of the day this Saturday, we may or may not have a clearer picture.

This coming weekend, defending champion and unbeaten Clemson will square-off with 9-3 Virginia in the ACC championship game.  The Tigers are prohibitive (as in 29 points) favorites to advance to the BCS Final Four.

Meanwhile, undefeated Ohio State will wrangle once again with 10-2 Wisconsin for the Big Ten championship.  Earlier this season, the Buckeyes clobbered the Badgers 38-7.  This week, Ohio State is shown as a 16-point favorite to win again.

That leaves the Southeastern Conference championship game between 12-0 LSU and 11-1 Georgia.  This game will be played in Atlanta, so the Dawgs have the home state advantage.  They may need it against the prolific offense of LSU.  Despite the location handicap, the Tigers are listed as a 7-point favorite this weekend versus Georgia.

If all three favorites win, who would be the fourth team to get into the playoffs?

According to the SwampSwami.com rankings this week, it would be #4 Oklahoma sliding into the final spot.

However, 11-1 OU must defeat the upstart Baylor Bears (11-1) for the Big 12 championship on Saturday in Arlington, Texas.  This is an opportunity for revenge for da Bears as OU survived their first meeting in November by a slim 34-31 count.  This week, the oddsmakers have pegged the Sooners as an 8-point favorite.

The Memphis Tigers are 11-1 and will host 10-2 Cincinnati in Memphis for the American conference championship.   If that game sounds familiar, it’s because Memphis and Cincy just played each other last weekend!

The Tigers won that game 34-24 (played in Memphis) and earned a right to host the rematch for the conference title on Saturday.  I’m not sure if I remember ever seeing two college football teams playing against each other on back-to-back weekends in the same team’s home stadium!

The Utah Utes are 11-1 and play 10-2 Oregon near San Francisco this Friday night for the Pac-12 Championship.

The 11-1 Boise State Broncos will host 9-4 Hawaii in a rematch for the Mountain West title.  Boise blasted the Rainbow Warriors 59-37 earlier this year.

Last but not least, the 11-1 Appalachian State Mountaineers will host the surprising 10-2 University of Louisiana Ragin’ Cajuns on Saturday in the hills of North Carolina.   App State defeated the Cajuns 17-7 in October down in Lafayette.  A big bowl payday awaits the winner of this game.

Who’s going to be the fourth team in the playoffs?

If Georgia beats LSU in a competitive match-up, then both SEC teams will likely advance.  If Georgia loses, then it’s a toss-up between the winner of the OU/Baylor match-up and Utah (assuming they should pluck the Oregon Ducks, that is!).

Sorry, Memphis, Boise, and App State.  The country’s big media outlets will vote sympathetically for a West Coast entrant and Utah (assuming they win) would get the nod.

With all of the potential outcomes, this will be a fun weekend of playoff-caliber football!  Grab some popcorn and hit the recliner for a long day Saturday!