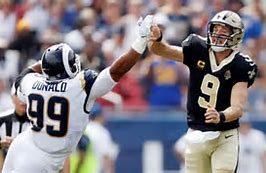 There are 32 starting quarterback jobs in the National Football League.

Heading into the third week of play, below are the injured starting quarterbacks from around the league:

I am also going to give an “Honorable Mention – Ironman Award” to the Houston Texans’ resilient quarterback, Deshaun Watson.  He has now been sacked four or more times in eight consecutive NFL regular season games.  He’s now in the NFL record book.  OUCH!

And don’t forget that the young star quarterback of the Indianapolis Colts, Andrew Luck, just retired a few weeks ago due to years of dealing with persistent injuries.

Is this just a run of bad luck for quarterbacks or is there a trend developing?

I believe this is a trend.  NFL defenses continue to get bigger and faster every season.  If the quarterbacks are being rushed faster than ever and being hit by defenders who hit with more force than ever, then it stands to reason that quarterbacks are much more likely to become injured more frequently, too.

This will also affect the NFL’s weekly television ratings, too.  Teams with a rabid national following such as Pittsburgh and New Orleans will likely draw fewer eyeballs without Big Ben Roethlisberger and Drew Brees at the helm of their respective squads.

Unfortunately, the two teams will roll-out back-up quarterbacks to lead their squads.

Injuries are a part of the game, and football is definitely a collision sport.

In Drew Brees’ injury, his throwing hand and thumb met the paws of Los Angeles Rams defensive specialist, Aaron Donald.  Though it looked like a freak play, it’s a surprise that this doesn’t happen more often.

For Big Ben, we don’t know what happened to his right elbow and it certainly didn’t look attributable to a direct hit by a defensive player.

Sure, both of these mainstays for New Orleans and Pittsburgh are past their prime years (Brees is 40 and Roth is 38 years of age).  That also puts them more likely to be injured due to the loss of speed and flexibility which naturally decreases with age.

The trend in injured quarterbacks, though, bears watching.  With New England Patriots’ QB legend Tom Brady now 42 and nursing a bad ankle heading into Week 3, the NFL’s home office will be hoping that Tom Terrific will be able to finish out the season as the Patriots have three remaining “prime time” national games, too.

NFL defensive players already bemoan the increasing number of limits which they have to make contact with the quarterbacks in the league.

On the other hand, the business of the NFL is best served to protect the league’s star quarterbacks.  With all of the fans dressed in a #9 Drew Brees jersey in New Orleans, a #7 Big Ben jersey in Steel City, and the legions wearing Tom Brady’s #12 jersey anywhere in the NFL, it’s certainly easy to identify the fan favorites.

On Monday Night Football this week, Cleveland Browns’ defensive end Myles “I’m not a dirty player” Garrett gave a hard shot and effectively ended the season of New York Jets’ back-up quarterback Trevor Siemian.  Despite the glee from Browns fans, I doubt you’ll see as many #95 Myles Garrett jerseys in Cleveland as you will for their quarterback, #6 Baker Mayfield.

Other than the 1985 Chicago Bears’ legendary defense, I haven’t seen many NFL fans get overly excited to watch a couple of defensive juggernauts go after each other on Sunday Night Football, have you? .

We are only 1/8th of the way through the NFL season with quarterbacks falling faster than the autumn leaves.

Don’t be surprised when the NFL’s television ratings start falling at a rapid pace, too.