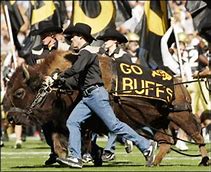 The stampede toward #1 continues in the second weekly poll in the 2018 SwampSwami College Football Top 25 rankings.

Ralphie the Buffalo has been missing from the national spotlight for several years.  Ralphie is ba-a-a-ck!

The University of Colorado Buffaloes are now 5-0 and remain the only undefeated team in the Pac-12 Conference.  The Buffs moved into my top ten this week after a convincing 28-21 win over Coach Herm Edwards’ 3-3 Arizona State Sun Devils.

Meanwhile, Bevo is quite happy this week after his Texas Longhorns pulled-off the biggest win of the past weekend by taking down formerly unbeaten Oklahoma in the annual Red River Showdown rivalry game in Dallas.  The 48-45 win featured a heart attack-inducing 21-point fourth quarter collapse by the Longhorns which allowed OU to tie the game.  Fortunately for Texas fans, a late field goal finally deflated the Boomer Schooner.  The 5-1 Horns move into my Top 25 poll at #12.

For #1-rated Big Al (the elephant mascot of the Alabama Crimson Tide), the stampede of first half points being put-up weekly by Nick Saban’s football squad continues to be the envy of some college basketball coaches.  The Tide dropped 42 first half points on the Arkansas Razorbacks – in Fayetteville, Arkansas – in a 65-31 trouncing of the hapless 1-5 Hogs.

See you next week!