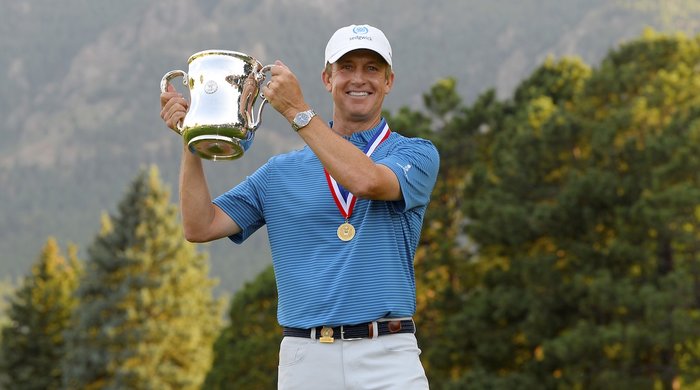 Just before the start of last week’s US Senior Open at The Broadmoor in Colorado Springs, Colorado, David Toms was missing a key part of his golf game prior to stepping up to the first tee.  His caddie.

His long-time caddie, Scott Gneiser, was unable to take the golf bag as a precaution after suffering chest pains.  Who could he get to caddie for him on short notice?

None other than his son, Carter Toms!  Carter, who plays college golf for his Dad’s alma mater at LSU, volunteered to loop for his Dad during the first two rounds of one of the biggest events of the year for golfers age 50 and over.

David Toms, now 51 and a winner of 13 PGA tournaments including a major at the 2001 PGA Championship, had been playing well this season in his second year on the senior circuit, but he was still looking for his first win on either tour in seven years.

According to Dad, son Carter Toms was quite jazzed about carrying the golf bag during the opening rounds of the US Senior Open:

“He was pretty nervous about it the first few holes, he was walking out in front of me, all jacked up. But it was fun, it was really neat. Even if I hadn’t won the tournament it would have been a fun story just to be able to have him caddying for me and it ended up being part of a great script.”

After the first two rounds, the father/son duo was perched at one-over par on the difficult mountainside layout.  Now it was time for Carter Toms to tag-out to his Dad’s experienced golf caddie.

Scott Gneiser, who began looping for David Toms in 1999, has been a steadying influence on the bag and was cleared by the doctors to work the weekend.

As the field at the US Senior Open struggled to break par, Toms and his experienced bag man, Gneiser, negotiated a bogey-free 4-under par 66 on Saturday to set-up Sunday’s clutch finish.

Paired with easy-going golfer Jerry Kelly in the final group, Toms relied heavily on his experienced caddie again to help steady his nerves.

”When we have to make a big decision or hit a big shot, he doesn’t get excited,” says Toms, a proud Louisiana native. ”He stays calm enough to keep me calm.”

As most of the other golfers struggled down the stretch Sunday, David Toms sank a long putt for birdie at the par-3 16th hole, rolled in a tricky downhill 20-footer for par at 17, and navigated a par on the closing hole to secure a one shot victory over three other golfers.

How will David Toms pay his two caddies after claiming this major championship and first win overall since 2011?

Answer:  Quite well, thank you!