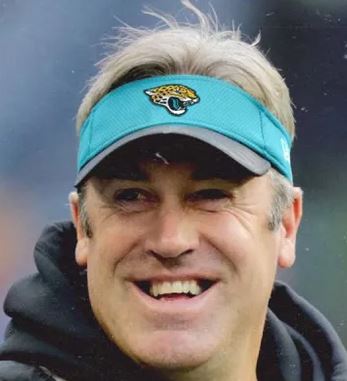 This Sunday in Philadelphia, the NFL football coach who led the Eagles to their lone Super Bowl triumph in February, 2018 will return to Lincoln Financial Field.  A statue of former Head Coach Doug Pederson adorns the outside of the football stadium in the City of Brotherly Love. 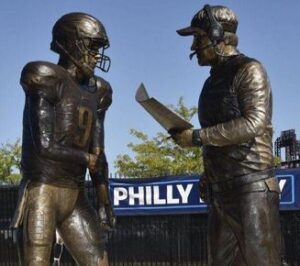 After spending one season out of the NFL, 54-year old Doug Pederson returns to the sidelines in Philly once again this weekend.  This time, it will be as the head coach of the visiting AFC South-leading 2-1 Jacksonville Jaguars.

The former head coach of the one and only Philadelphia Eagles team to win a Super Bowl was fired by the team following a disappointing 4-11-1 record in 2020 – just three years after winning the NFL championship.   Doug Pederson had a solid five year run as head coach in Philadelphia and took the team to three different playoff appearances.  His 42 wins is the fifth-most wins in the Eagles franchise history.

This year, Doug Pederson’s first two wins (in just three games as the coach in Jacksonville) already gives him the fifth-best winning total in the relatively short 26-year history of the AFC’s franchise in Jacksonville.

There is literally no place to go but up when you’re coaching in Jacksonville. 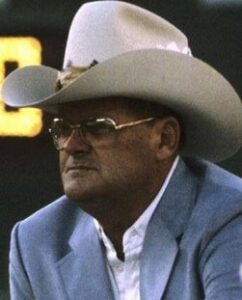 Losing is hard enough.  Having the home town fans turn on you can become downright brutal.

As any former player or coach will tell you, Philadelphia’s fans have no mercy when it comes to letting their coaches and players know how they feel.  During Doug Pederson’s final year as head coach in Philly, unhappy fans turned on the football coach who had taken the city’s NFL franchise to their first (and only) Super Bowl title. 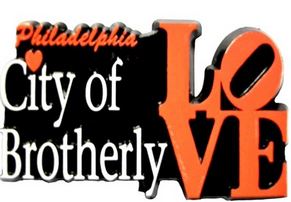 In January, 2021, Coach Doug Pederson was fired by the football team he led to an NFL championship just three years earlier.   Pederson had gone from a hero to a zero.

As a Football Player

Doug Pederson was a three-sport athlete while attending high school in a small city located just ten miles south of the Canadian border in northwest Washington.   He came south to Monroe, Louisiana to play college football for the 1-AA Northeast Louisiana University Indians (now known as the ULM Warhawks in the FBS division).

While at Northeast, Doug Pederson was a three-year starter at quarterback.  He led the Indians to the 1987 NCAA national championship with a thrilling 43-42 win over Marshall University. 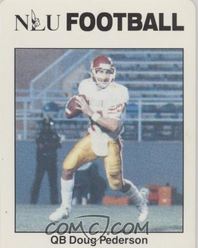 Doug Pederson was inducted into the school’s Hall-of-Fame in 2002.  ULM’s Malone Stadium still proudly salutes the school’s only national championship football team with a sign displayed inside the stadium.

An undrafted free agent, Doug Pederson earned a spot on the practice squad with the Miami Dolphins in 1991.  He became the back-up quarterback for Dan Marino in Miami.

Upon leaving Miami for the frozen tundra of Green Bay in 1995, Doug Pederson became the back-up for Packers quarterback Brett Favre.  He earned a Super Bowl ring for his role with the 1996 Packers team.

In 1999, Pederson moved on to Philadelphia to play quarterback for the Eagles under the team’s new head coach, Andy Reid.

Coach Reid was quite familiar with Doug Pederson.  Andy Reid had been the offensive coordinator in Green Bay while Pederson was there.  After being named the starting quarterback in Philly, Doug Pederson went just 2-7.  He was benched in favor of the Eagles’ highly touted rookie quarterback, Donovan McNabb.

After just one season as a player for the Eagles, Pederson was cut.

After retiring from professional football, Doug Pederson returned back to Louisiana to raise his young family.

As a Football Coach

He became a high school football coach in Shreveport. 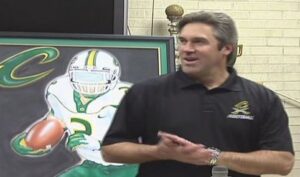 He took the Calvary Baptist Academy Cavaliers into the Louisiana high school playoffs in each of his four years as the head coach with the school.

Doug Pederson had all of the makings of a very good football coach.

As a player, he participated on championship teams in college and in the NFL.  A role player for most of his time in the NFL, the long-time back-up quarterback prepared each week as if he may be called-up to come into the game.  While on the sidelines, Pederson provided key observations and feedback to the starting quarterback from his vantage point.  His mind was always involved in the game.

After Doug Pederson had committed to coaching as his next career, it wasn’t a big surprise that he received an assistant coaching offer from his former head coach in Philadelphia, Andy Reid.

Pederson accepted the position and joined Coach Reid and the Eagles staff in 2009.   When Reid took the head coaching job in Kansas City in 2013, Doug Pederson came along to become the team’s new offensive coordinator. 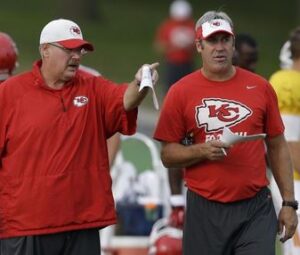 After three successful years in Kansas City, Doug Pederson received an offer to become the next head coach of the Philadelphia Eagles in early 2016.   He was instrumental in selecting quarterback Carson Wentz from FCS champion North Dakota State in the first round of the 2016 NFL draft.

You might remember that Coach Pederson also played his college football for a small division team which won a national championship, too.

As a Super Bowl Champion Coach

Though the Eagles went 7-9 during Doug Pederson’s first year in Philly, the team was starting to show progress.  The following year, the 2017 Eagles went 13-3 during the regular season and defeated the Tom Brady-led New England Patriots 41-33 in the 2018 Super Bowl.

During the game, Coach Doug Pederson became famous for one of the most gutsy play calls in Super Bowl history.

Right before halftime, Philadelphia had driven the football down the field while clinging to a narrow 15-12 lead over the heavily favored Patriots.  The Eagles faced a fourth down and one decision inside New England’s five yard line with just seconds left in the half.  A short field goal attempt was expected by nearly everyone watching the game. 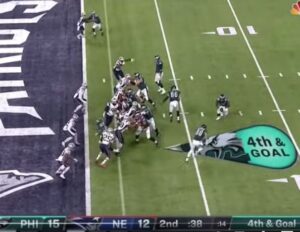 Eagles quarterback Nick Foles walked up toward the center and then suddenly moved toward the right side of the offensive line.  The center snapped the ball to a running back that then flipped the football backward to an approaching tight end.   By this time, the quarterback was totally forgotten by New England and left uncovered.  After the tight end took the pitch from the running back, the tight end lofted a short pass to the wide open quarterback to complete a very unique and game changing touchdown.

That score would give Philadelphia a 22-13 halftime advantage on their way to a 41-33 win.

After the game, the media dubbed the play the “Philly Special”.  In reality, the idea for this play came from the high school playbook of Philadelphia’s quarterback, Nick Foles.

The former Westlake, Texas high school quarterback had pitched the idea to Coach Doug Pederson earlier in the season.  The team worked on the play in practice for weeks in hopes of running it at just the perfect time.

What better time than the Super Bowl? 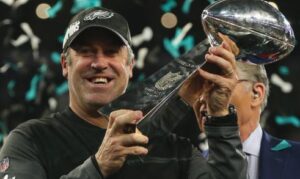 Coach Doug Pederson gained the adoration of Philadelphia fans for taking a carefully calculated risk and executing such a unique play to help propel the Eagles to victory.

After the glow of winning the Super Bowl, the Eagles’ on-field success under Doug Pederson waned.  The team posted records of 9-7, 9-7, and 4-11-1 in the following three seasons.   The Eagles fired Pederson in January, 2021.

He spent the following year back in Monroe, Louisiana contemplating his next move while following his son’s college football career. 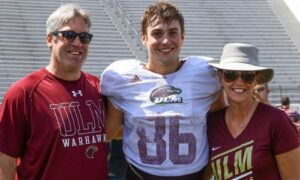 Josh Pederson played tight end for his Dad’s alma mater at UL-Monroe.  He is now playing for the USFL’s Houston Gamblers franchise.

He said, “It’s the family, the friends and spending so much time here.  Even when I spent 14 years in the NFL, Monroe was always our home. We always came back here in the off-season and still have a home here.”

As a Turnaround Specialist

By the end of the 2021 NFL season, one of the worst franchises in professional football made a pitch to bring Doug Pederson back into a head coaching position once again.

The Jacksonville Jaguars are one of just four NFL teams (Detroit, Cleveland, and Houston are the others) which have never participated in a single Super Bowl.  After the team’s owner brought successful but controversial former college football coach Urban Meyer onboard in 2021, the team imploded to a league worst record of 3-14 last year.  Meyer was fired after just thirteen games in 2021 as the team was 2-11 at the time.

Coach Doug Pederson’s positive personality is clearly the opposite of Urban Meyer.  The laid-back former quarterback was a management major in college at Northeast Louisiana.  It shows. 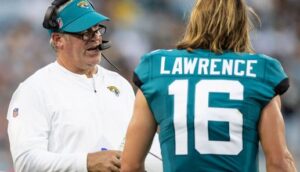 He enjoys a close rapport with many of his players and coaching staff.   The team’s performance on both offense and defense has already exceeded most fans’ expectations in 2022.  The Jacksonville Jaguars are off to a 2-1 start.

This Sunday, Coach Doug Pederson takes his AFC South division leading Jacksonville team into Philadelphia to play against his former team (which is off to a surprising 3-0 start).

Pederson spent a total of ten years in Philadelphia as a player, assistant coach, and head coach for the city’s beloved Eagles.  It will be interesting to see what type of reception he receives from the team’s enthusiastic fans on his first visit back to Philly this weekend.

The City of Brotherly Love isn’t exactly known around the NFL for giving warm welcomes to the players or coaches of the opposing team.   Perhaps this Sunday might be a little bit different? 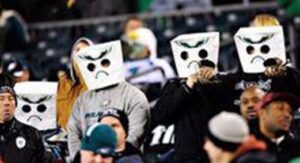