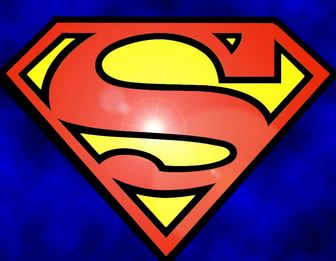 Now that the SEC and the Big Ten have expanded to 16 schools beginning in the next few years, should they keep going and add even more teams?  How about 20 teams each?

The rapidly vanishing Big 12 Conference lost anchor tenants Texas and Oklahoma to the expanded Southeastern Conference.  In terms of damage to a conference, the loss of Texas and OU within the Big 12 equates to losing Macy’s and Target from your local shopping mall.  Though the mall still has a number of tenants, the interest and traffic will significantly decline.

A few weeks ago, the Big Ten plucked USC and UCLA away from the Pac-12.   From my perspective, the Pac-12 could easily add San Diego State and Boise State to their conference and be nearly as potent in most major sports.

Ah, yes.  This issue is not about increasing the level of the competition on the field for each conference.  It is mostly about the television markets which each team in the conference will bring to the table.

To their credit, the Southeastern Conference still believes that their members should remain a good geographic fit in addition to providing a sizable television market.  With the 1991 addition of Arkansas and South Carolina and recent westward expansion to soon include Texas and Oklahoma, every SEC school’s state border touches at least one of another conference member’s borders. 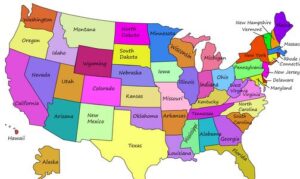 Meanwhile, the Big Ten has opted for the “We’re BIG, Bad, and Nationwide” expansion strategy.  By adding two West Coast teams in USC and UCLA along with East Coast conference members Rutgers and Maryland, the Big Ten Conference now stretches from sea to shining sea.  Whether that is a good idea is the subject for a future discussion.

Let’s now pause for a bit and reflect.  What would each of these two growing mega conferences be considering as they ponder increasing from 16 teams to as many as 20 teams each.

With their national brand strategy, it makes the most sense to add teams which already can boast of having a national appeal regardless of the school’s location.

Colleges which fit this profile would include Notre Dame (Catholic Church), Brigham Young’s growing Mormon following, and the military service academies.  Notre Dame (ACC in all sports except football) and BYU (set to join the Big 12 in 2023) already boast of having a dedicated national audience and would pad the Big Ten’s growing television profile.

University of Miami (FL) – I can also make a case that the Big Ten might be interested in bringing the U onboard, too.  The Hurricanes have developed a nationwide following over the past 50 years, are located in the nation’s #16 television market, and would be a premium travel destination for fans of the Big Ten.  The Canes (currently residing in the ACC) are like the Dallas Cowboys of college football.  Fans either love them or loathe them, but they watch this team anyway.

Oregon – The West Coast equivalent to Miami may be the Oregon Ducks from the Pac-12.  Though not as widely loved or despised nationally as the University of Miami, Oregon’s athletics resume has been growing over the past decade and developing a national following.

So, my predictions for the Big Ten’s next additions are: 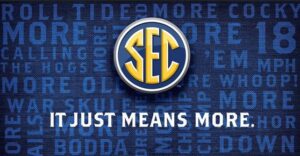 Now, let’s take a detailed look at the next best options for the SEC.  Up to this point, the SEC has continued to grow its reach by adding geography along its current borders.

After the addition of Texas and Oklahoma, the states which border the new SEC (from east to west) are North Carolina, Virginia, West Virginia, Ohio, Indiana, Illinois, Iowa, Nebraska, Kansas, Colorado, and New Mexico.

By process of elimination, we can drop Ohio, Indiana, Illinois, Iowa, and Nebraska due to their current ties to the Big Ten.  Likewise, New Mexico does not have a significant presence on the national sports stage, so they’re outta here.

That leaves the states of North Carolina, Virginia, West Virginia, Kansas, and Colorado to consider for the most likely geographic additions to the SEC if the league adds even more teams.  Here’s my analysis of the teams which may be in play within each state:

North Carolina – This state brings two of the nation’s top television markets (#24 Charlotte and #27 Raleigh-Durham) to the SEC table.  The University of North Carolina’s longtime basketball history makes them the most logical candidate to come aboard first.  UNC’s football program has been on the upswing recently, too.  NC State would make for an attractive second university from North Carolina should the SEC desire two schools from this growing state.

Virginia – This is a tougher analysis.  I think that Virginia Tech’s recent winning tradition and rabid fan support would be much more compatible with the SEC’s other schools.  The University of Virginia might counter that their success in basketball is worthy of the top selection from this state.  The state’s top television markets include #9 Washington, DC, #43 Norfolk, #58 Richmond, and #67 Roanoke-Lynchburg.  I believe that the football history at Virginia Tech will give them the edge here.

West Virginia – The Mountaineers definitely have a rabid football following and compete well in most Big 12 sports.  The TV viewers in nearby Pittsburgh (#23 TV market) and in Charleston-Huntington (#65 TV market) would make West Virginia an attractive candidate.  However, I think that the Mountaineers are likely a second tier expansion choice for the SEC.

Kansas – Both the University of Kansas (basketball) and Kansas State (football) would be interesting possibilities for the SEC.  The state’s largest TV markets include #31 Kansas City and #69 Wichita.  Either team would make a solid regional rival for SEC schools in Missouri, Oklahoma, and Arkansas.  Like West Virginia, I just don’t see a viable SEC future for either university within the state of Kansas.

Colorado – Now, this is a very interesting idea if you want to move the needle primarily on television viewers for the SEC.  The Colorado Buffaloes would bring the nation’s #18 television market (Denver) with #91 Colorado Springs as a bonus.   Working against CU is the fact that the school is not even close to the South and doesn’t have a recent history of success in football or most major sports.  By far, Colorado is easily the longest-shot for an invite to join the SEC.

A few other universities could become the second school within the same state as another SEC member.  Let’s consider a few of these teams to assess their worthiness within an expanded SEC:

Oklahoma State – The Cowboys (Big 12) are at the top of my list for teams to consider which would make a terrific fit into an expanded SEC.  Okie State is the long-time rival of Oklahoma (the Bedlam Series) and is close to a couple of SEC geographic outliers in Arkansas (185 miles) and Missouri (416 miles).  The Tulsa TV market (#61) isn’t a huge “get”, but the Cowboys compete at an SEC-caliber in football and in most of other sports.

Clemson – The Tigers (ACC) are one of the anchor teams of the Atlantic Coast Conference.  Clemson brings the #24 Charlotte TV market along with the fast-growing #36 Greenville-Spartanburg television market, too.  The Clemson-South Carolina intrastate rivalry games would be fun to watch.  Plus, the Tigers are located less than 80 miles away from Athens (home of the University of Georgia).

Florida State – The Seminoles (like Clemson) are long-time members of the ACC.  They are already the bitter intrastate rivals of the SEC’s Florida Gators.  The Tallahassee television market does not crack the Top 100, though.  The Seminoles’ long history of being a national competitor in many team sports would be the primary reason to bring them into the SEC.

Georgia Tech – Another ACC member, the Atlanta-based Yellow Jackets have seen their fortunes fade in athletics over the past couple of decades.  Though they would make for a great regional rival for both Georgia (75 miles) and Auburn (110 miles) within the SEC, Georgia Tech’s lackluster performance in most major sports makes them a long-shot to be invited to the SEC.

Below are the SwampSwamiSports.com rankings for most likely future schools to join the SEC: 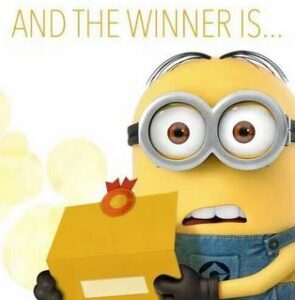