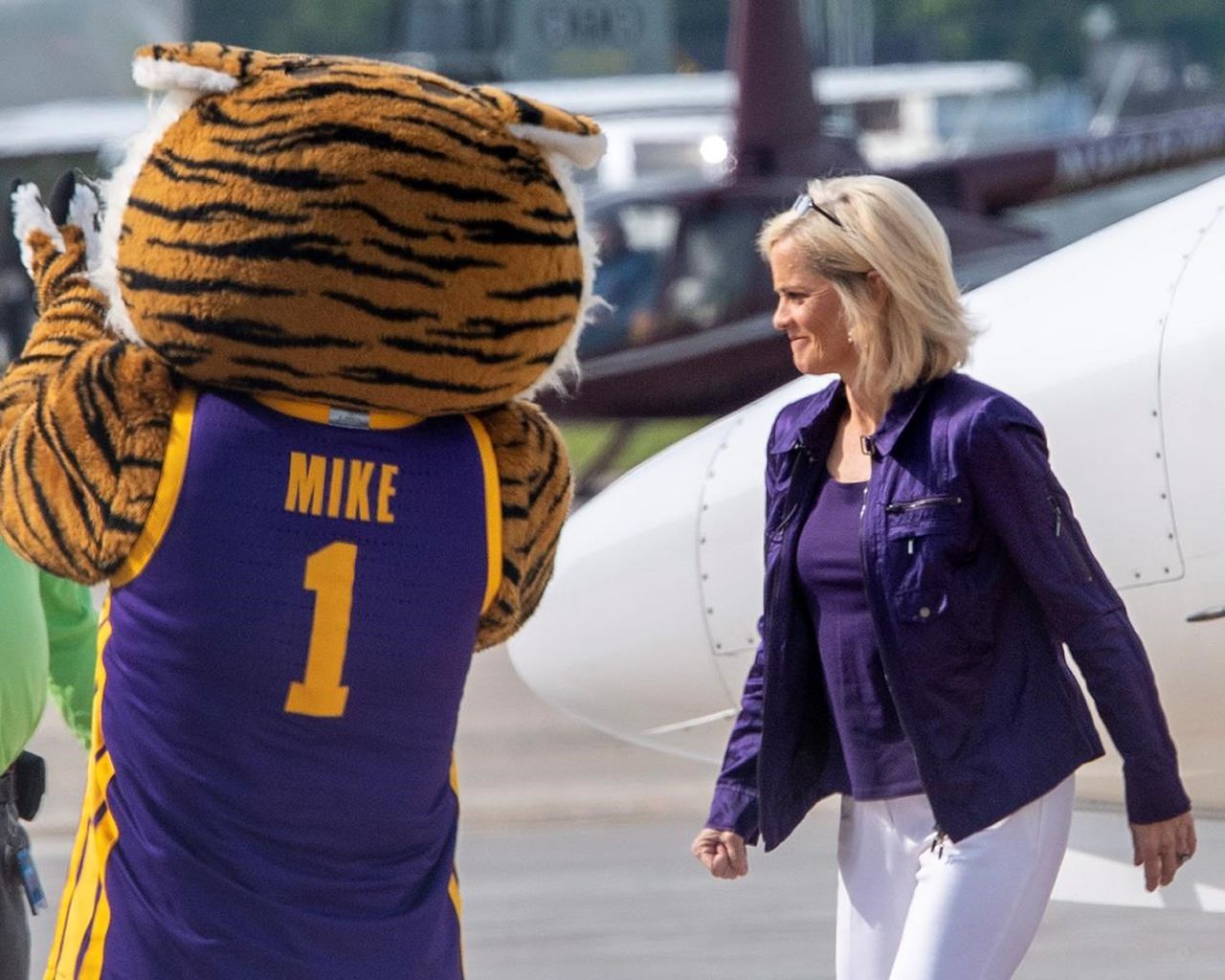 Thanks, Baylor!  Louisiana needed that.

The LSU Tigers just hired one of the most successful college women’s basketball coaches in America as they introduced Kim Mulkey on Monday to their fans in Baton Rouge.  Mulkey’s introductory press conference was shown on several television stations around the Bayou State.

Given all of the negative publicity which Louisiana’s flagship university has received (most of it self-inflicted), the hiring of a Louisiana native to take control of the women’s basketball program was a much needed positive shot in the arm for sports fans of the university.  Mulkey is replacing former coach Nikki Vargas, who stepped down from LSU last week.

Kim Mulkey is returning to Louisiana after a 21-year detour via Waco, Texas as head coach of the Baylor women’s basketball program.  She built a powerhouse program in central Texas which has produced three national championship teams (2005, 2012, and 2019) out of Baylor’s four trips to the women’s Final Four.

In her introductory press conference on Monday, Mulkey said all the right things to the home crowd in the Pete Maravich Assembly Center.  She was born and raised just 40 miles down I-12 east of Baton Rouge in the town of Tickfaw near Hammond.  Kim Mulkey charmed the locals on Monday with references to her fond memories and love of Louisiana’s food, festivals, and people.

Mulkey pointed skyward and advised the adoring crowd to notice that LSU’s rafters showed several teams which advanced to the Final Four but not one team has raised a national championship banner – yet.  With a career coaching record of 631-104 at Baylor with every one of her teams winning 20 or more games each year, there are few basketball fans in the state of Louisiana who don’t believe that LSU’s new coach, Kim Mulkey, can deliver on that promise.

For reported salary of $2.5 million per season, LSU is making a big bet that Kim Mulkey will be able to take women’s basketball to higher levels of success very soon.

After a successful high school career (136-5 with four high school state championships at Hammond High School in southeastern Louisiana), the 5’4” high school All-American playmaker Kim Mulkey headed north to Ruston to play college basketball for the successful Louisiana Tech Lady Techsters basketball program beginning in 1980.  She was the point guard on two national championship teams at Louisiana Tech and won a gold medal as part of the US Olympic team in 1984.

As Kim Mulkey told the LSU crowd at her press conference Monday, she didn’t initially have her sights on becoming a basketball coach.  She was a business administration major at Louisiana Tech and had already started coursework toward her Master’s degree.

One day, she received a message instructing her to immediately come to the office of the university’s chancellor, F. Jay Taylor.  She told the crowd, “When the chancellor called, I literally ran-up all 16 floors to the top of Wily Tower to see what I had done wrong!”  The school offered Mulkey an assistant coaching job to help Louisiana Tech’s new head coach Leon Barmore as he was taking over the women’s program from successful long-time coach Sonja Hogg.

Kim Mulkey would stay at Louisiana Tech for another 15 years as she worked her way up the coaching ladder to become the assistant head coach.  Everyone in north Louisiana figured that she would become the next head coach in Ruston, but that’s where the story twists.

In 2000, Kim Mulkey was offered the keys to literally build the women’s college basketball program at the Big 12’s Baylor in Waco, Texas.  Baylor’s women’s team had just gone 7-20 in the previous season.  The fiery Mulkey immediately turned around the basketball team’s fortunes by going 21-9 in her first season as a head coach.  She would become the fastest women’s coach to reach 600 career victories during her time in Waco.

Kim Mulkey’s four-year players at Baylor have all graduated with a degree in hand, too.  Yes, Mulkey pushes her players to get their college education as well as play their best basketball.

Meanwhile, back in Louisiana, Hall-of-Fame coach Leon Barmore finally retired at Louisiana Tech in 2002.  The school would shock alumni and fans by hiring then-assistant coach Kurt Budke to become the school’s next women’s basketball coach.  Fans still scratch their heads wondering why the school didn’t try harder to bring Mulkey back home to Louisiana.

For her part, Mulkey would continue building her program in Baylor and won the first of three national championships in 2005.  She would even reach out to add her former mentor at Louisiana Tech, Leon Barmore, as an assistant basketball coach at Baylor from 2008-2011.

In 2008, Kim Mulkey wrote an autobiography entitled, “Won’t Back Down” where she describes the many trials she has overcome and how she continues to battle on.

Though Baylor fans are saddened that their legendary women’s basketball coach decided to move back to her home state of Louisiana, Kim Mulkey’s arrival at LSU is a very timely hire by the school’s new athletics director, Scott Woodward.

On the very same day as Kim Mulkey was being introduced to Tiger Nation at the PMAC, seven women filed a $5 million lawsuit Monday against LSU’s administration and sports leadership for failure to take serious actions against accusations of sexual assault by men associated with the sports programs at the university.

The apparent lack of accountability at LSU has eroded confidence in the leadership at the school and may result in long-term negative consequences as well.

She definitely loves to compete and does not back down from a good challenge.  As much as Mulkey is looking forward to rebuilding the school’s women’s basketball program into a national champion at LSU, the university’s loyal and fiery sports fans are just as hopeful that her arrival might help to restore the schools’ flagging reputation just as fast.