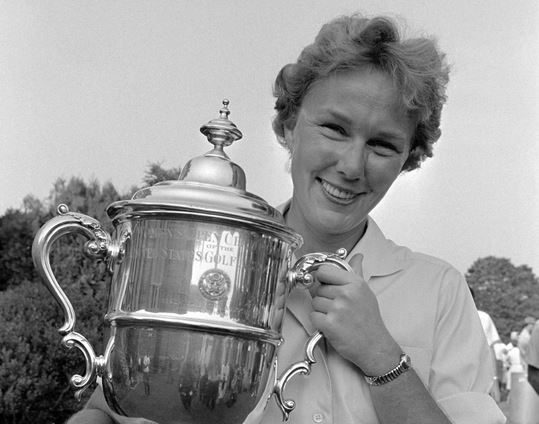 Mary Katherine  “Mickey” Wright passed away Monday at the age of 85.   Most people who follow sports probably do not know very much about this pioneer of women’s professional golf.

It’s not a stretch to suggest that Mickey Wright was the ladies’ version of Jack Nicklaus.  She absolutely dominated the field nearly every time she teed-off in a professional golf tournament.

Betsy Rawls, a 55-time LPGA winner, said, “Mickey’s shots were something to behold.  She was the longest hitter of her era, but it was more the character of her shots that separated her from the rest. Her shots were always high, with tremendous carry.  She contacted the ball at precisely the right point in the arc of the swing and with such clubhead speed that no shot was impossible for her.”

Sounds a lot like how Jack Nicklaus played men’s golf, doesn’t it?

Despite retiring from professional golf at the youthful age of 34, Mickey Wright is still the second-leading winner in the history of the Ladies Professional Golf Association.  She won an amazing 82 times on the LPGA Tour – primarily during the 1950’s and 1960’s.

Patty Berg won 15 majors during the 30’s, 40’s, and 50’s.  Annika Sorenstam is holding onto third place with ten major victories in her stellar golf career.

I was fortunate enough to see Mickey Wright play golf in person at the Shreveport Kiwanis Club Invitational held at Palmetto Country Club in the late 1960’s.  My Dad, who wasn’t a golfer, knew how much I liked playing golf, so he took me to walk the course for Sunday’s final round.

It was amazing to see how far this 5’9” ladies golfer could drive a golf ball.  Mickey Wright routinely drove the golf ball well over 250 yards (at a time when 225 yards was considered the tour average for women), but she was also deadly with an iron in her hands going for the greens.

In other words, Mickey Wright was a factor to win nearly every LPGA event she entered.

Born in southern California, her father (Arthur) recognized Mickey’s interest in golf at age 11 and took his daughter to lessons with local golf professional Johnny Bellante.

One of his first lessons was to break off a limb of a eucalyptus tree.  He handed it to Mickey and said, “Make this branch sing!”

She recalled, “To make a loud noise when I swished the branch through the air, I had to apply as much speed as I could, smooth but forceful. What a wonderful first lesson that was. It taught me the sensation of swinging through the golf ball, not at it.”

Men’s golf legend Ben Hogan, whose swing is beloved by many for its efficient, repeating beauty, said, Mickey Wright “had the finest golf swing I ever saw.”

Mickey Wright went to Stanford University for one year and then left school to join the fledgling LPGA tour (which began in 1950) in 1955 at age 20.

During a four-year stretch beginning from 1961-1964, Mickey Wright won an incredible 44 times (including 8 major championships) on the ladies pro golf tour.   She won 10, 10, 13 and 11 victories over those four years.

During that same period, Mickey Wright also served as president of the LPGA and played in as many as three dozen events a year in order to please the sponsors of those golf tournaments.

She said during an interview, “The sum of trying to meet the expectations of the LPGA, my father and the public exhausted me physically and emotionally. I developed an ulcer and had all kinds of anxiety. It wasn’t the years, it was the mileage.”

In 1969, Mickey Wright left the women’s tour as persistent foot pain forced her to play golf in tennis shoes.  Mickey Wright was likely burned-out from playing so much golf at such a high level during a relatively short number of years.

Wright was burdened by expectations and weary of the stage.  Fellow LPGA star and longtime friend Kathy Whitworth said, “Mickey would have been quite happy to play at dawn in front of nobody and shoot a score.”

There was another legendary golfer who retired from the sport at age 34.  During his relatively short career, PGA great Byron Nelson left the men’s professional tour after winning an incredible 52 times (still good for sixth place all-time on the men’s tour).

At the age of 34, LPGA golf legend Mickey Wright had grabbed 81 wins and then literally dropped off the radar.  Though she still competed on a few occasions during the 1970’s, she won only once more at the 1973 Colgate-Dinah Shore Winner’s Circle.

With 82 professional golf wins, Mickey Wright trails only Kathy Whitworth (88).  Whitworth said, “She had 82 wins, but she would have won over 100 with no trouble if she had stayed on tour.”

By comparison, men’s golf legends Sam Snead and Tiger Woods are tied for the top with 82 wins apiece.  Jack Nicklaus is third with 73, Ben Hogan 64, and Arnold Palmer grabbed 62 titles during his illustrious career.

She was also a breast cancer survivor after discovering some issues in 2006.

In one of the final interviews the reclusive Mickey Wright gave a few years ago, she was hopeful that there is golf in heaven.

“I hope I get there and that it’s just me and my 2-iron. Or maybe a couple of angels will be looking on. Everything will look like Sea Island Golf Club (coastal Georgia) did in the old days, sedate and beautiful. I’ll be facing that shot to a well-trapped green again, trying to duplicate a perfect golf shot from 1957.  If it’s really heaven, I’ll pull it off.”

We know you will, Mickey!  Rest in peace.