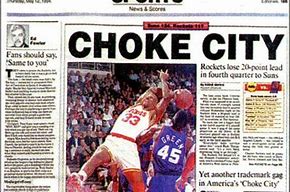 Twenty-five years ago this spring, the Houston Rockets were playing Charles Barkley and the Phoenix Suns in the 1994 NBA Western Division semi-finals.

The Rockets, who were favored in the series, surprisingly lost both Game 1 and Game 2 at home by blowing fourth quarter leads.  After the team’s ugly Game 2 loss, the Houston newspaper featured the headline “Choke City” with a story about how the local team had wilted under pressure.

That Houston Rockets’ team eventually rallied to win the series over Phoenix four games to three.  In the NBA Finals, the Rockets found themselves down again three games to two but rallied to win games six and seven and collected the first of their two consecutive NBA championships.

With the title, the same Houston newspaper published the headline “Clutch City” to denote the team’s ability to focus when the chips were down and win under extreme pressure.

Twenty-five years later, the Houston Rockets are again in the Western Division semi-finals of the NBA playoffs playing the Golden State Warriors.  This year, though, the home teams have won all four games.  Nobody in Houston is even thinking “Choke City” with the series tied 2-2.

In Boston, though, things are quite different.  The city, which had endured a long drought of championships from its baseball, football, basketball, and hockey teams, has seen great success with their sports franchises since the year 2000.

The New England Patriots have won six of the past 18 National Football League Championships.  The Boston Red Sox have won baseball’s World Series four times, and the Boston Bruins have hoisted hockey’s Stanley Cup back in 2011.

The Boston Celtics basketball team is known for its winning ways.  The Celtics have won the NBA title 17 times, but only one time (2008) since 1986 after the Larry Bird era ended.

Boston’s sports fans have become quite proud of their recent championship successes.  This season, the expectations were sky high for the Celtics to return to the mountaintop of professional basketball again.

That’s because, at the end of last season, the scrappy Celtics had fought their way into the NBA Eastern Conference finals before finally losing to the LeBron James’ led Cleveland Cavaliers.

This year, the Celtics would have all-star guard Kyrie Irving healthy again and add former Utah Jazz all-star forward Gordon Hayward into the line-up.  With LeBron James leaving Cleveland for the Western conference Los Angeles Lakers, it was easy to see why Boston Celtics fans were thinking that their beloved basketball franchise might be heading for another championship season.

Unfortunately, the Boston Celtics have just dropped two straight home games in Boston Garden the past week and now trail the surprising Milwaukee Bucks three games to one heading back to Milwaukee for Thursday night’s Game 5.

On this website, I have provided my opinions on why I think Kyrie Irving has been a really bad fit in Boston.  Now, some of his Celtics teammates and many fans seem ready to pay for his moving van out of town, too.

After Monday night’s loss to Milwaukee, Irving, who shot a dismal 7 for 22 from the field and has gone 19 out of 62 in the past three games (all losses), told the media he should have taken even more shots than he did during Game 4 in Boston Monday.

Great shooter?   I don’t believe that a 31% field goal percentage equates to such an egotistical claim.

Great shooters are not necessarily measured by points scored alone.  In the professional ranks, you need to be effective when it counts the most.

I may have been considered a good shooter in high school, but I’m not an NBA player being paid $20 million per season to prove it when your team is in the second round of the playoffs.

Kyrie Irving’s contract with the Boston Celtics could continue for one more season, but he has the right to ask for an early termination of his current contract this summer.

Given the immature way in which Irving has handled himself in Boston for much of this season and now in the playoffs, a mutual parting of the ways seems to be quite likely.

The Boston Celtics rally from a 3-1 deficit to win this series (a 5% statistical chance based on historical NBA stats), that is.

More likely, though, that ugly moniker of “Choke City” may show-up again after a twenty-five year break after the self-proclaimed “Great Shooter” Kyrie Irving and the highly-hyped Boston Celtics fail to live up to fans’ expectations.