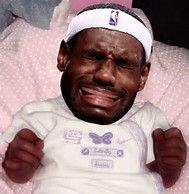 You can guarantee one thing about basketball’s LeBron James.

Every season, no matter where he is located, there will be controversy and drama.  Sometimes (three times during his career, to be exact) there will be joy, too.

Ever since emerging as one of the final NBA players who arrived in the league straight out of high school, LeBron James’ career has been marked (and marketed) by a litany of annual angst.

Yes, he won two NBA titles when playing in Miami and another in 2016 after he returned to Cleveland.

It seems that nearly everywhere James goes to play basketball, there is a trail of coaches and/or teammates who are tossed overboard if the self-proclaimed “King” isn’t happy.

This year, LeBron took his almost 35-year old talents to LaLa Land to play for the Los Angeles Lakers.  For a guy who dominated in the NBA’s weaker Eastern Conference for his entire career, coming west to Los Angeles seemed to meet a few career checkmarks.

By moving to LA, LeBron James would position himself in the area where he already owned a home.

Next, James would be located in a city where his ever-expanding media profile could grow even larger.  Between basketball and LeBron’s interest in marketing his name in film and television, TinselTown is the place to be.

Lastly, James could (potentially) separate himself from Michael Jordan as basketball’s #1 name brand if he could somehow turn around the moribund Lakers from losers into NBA champions again.

And what better city to write that story, eh?

After his first year in Los Angeles, LeBron James’ grand plan has started to unravel.  Sure, he may be personally comfortable ($30 million per year playing basketball can do that), and he’s already immersing himself into the television and film production business.

Basketball?  Oops.  LeBron’s appearance in a Lakers uniform this season did not translate into the team making the playoffs.

Prior to the coming of King LeBron, the Los Angeles Lakers sported a record of 35-47.

This year?  The Lakers improved to 37-45 (just two games better) and failed to qualify for the playoffs for the sixth straight season.

The one thing we know about LeBron James is that he doesn’t willingly accept much (if any) of the blame.  LeBron’s overbearing presence on the basketball court didn’t seem to elevate his teammates’ performance, while his meddling behind the scenes may have been a bigger part of why the Lakers failed to improve after his first year in Los Angeles.

Making matters worse, an 80-year old Los Angeles Lakers Hall-of-Famer by the name of Jerry West has quietly managed to dump all of the big-named stars at the cross-town rivals, Los Angeles Clippers.  Instead of going to the bottom, West’s Clippers are in the NBA playoffs right now, while LeBron James sits at home for the post-season and ponders his next move (or movie?).

Already, the Lakers front office has begun to crumble after the failed expectations of this season.

Before the Lakers final game last week, another Lakers legend, Magic Johnson, abruptly quit his position as President of the team.  He did so without even telling his boss!   In true LA style, Magic held a press conference and explained to everyone else why he thought it was time to go.

He wasn’t having any fun!  Seriously.  So, Magic Johnson walked away after a turbulent season trying to manage the ego of one of the NBA’s best players who also happens to be most difficult personalities to control in the game.

After the Lakers final game last week, head coach Luke Walton was fired.  Depending on whom you listen to, Walton and LeBron James never got along very well (a common theme in James’ relationships with several coaches during his career).

Ironically, Luke Walton was immediately hired this week by the Lakers’ NBA Western conference rival Sacramento Kings.  Apparently, other people in the NBA believe that the problems in Los Angeles this season were not the result of bad coaching.

So, the President and the Head Coach are now gone.  That leaves the Lakers’ General Manager, Rob Pelinka, as the last person standing in a key management role.

Since assuming his job two seasons ago, Pelinka hasn’t been successful by any means.  Believe it or not, he had no prior experience in his GM job, though.

Rob Pelinka was an NBA player’s agent prior to being hired by the Lakers!  Yes, that’s the guy who does his best to get as much money for his players so that he, too, makes more money.

He seemed to be the most likely person who SHOULD have been fired, but he may be spared from the current Lakers’ management dumpster fire.

And this is where LeBron James returns to our story.

After running off one coach in Cleveland (David Blatt), James was instrumental in getting former Los Angeles Lakers guard, Tyronn Lue, promoted and hired in Cleveland to coach LeBron and the Cavaliers in 2016.

Lo and behold, the Cleveland Cavaliers became the NBA champions the same year!

Alas, LeBron left Cleveland last season in 2018 and stranded his little buddy, Tyronn Lue, with a team of Gilligan’s Island-like castaways.  Lue was fired after only six games (0-6 start) with the LeBron-less Cavaliers this season.

Now, the great puppet master, LeBron James, is pushing the proverbial “Last Man Standing” of this sinking Lakers’ ship (Rob Pelinka) to hire his good buddy, Tyronn Lue, as the new head coach for the Lakers.

Since Pelinka’s leash is likely short and ownership is fully onboard with the current “All LeBron, All the Time” show in LakerLand, Tyronn Lue should be considered as the front runner for the coaching job.

After that, LeBron can resume pulling Pelinka’s strings to bring in a few expensive free agent players (assuming any significant NBA stars would take the cash in order to play second fiddle to “King” James, that is).

Of course, LeBron could be setting the table to become either the General Manager or even the coach himself.

Regardless of the short-term outcome, there is one thing I feel certain about.

LeBron James is going to create more unrest for the Lakers until he gets his “change”.

The smell coming from the Los Angeles Lakers organization in the past week indicates that someone needs to deliver a new nanny and a big box of Pampers to take care of the NBA’s biggest baby – quickly!