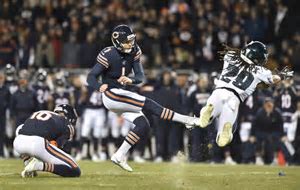 Though I think he looks more like Peter Parker from the Spiderman movies, Chicago Bears’ placekicker Cody Parkey will now be known as “Double Doink” after his heartbreaking missed field goal last weekend versus the Philadelphia Eagles.

Parkey had kept da’ Bears in the slugfest game with the Eagles by making his first three field goal attempts.  With seconds to play, he lined up a game winning 43 yard attempt and drilled it through the uprights!

But wait, the Eagles had called a time-out right before the kick.

The second attempt veered to the left, hit the left upright, then bounded downward to the crossbar, bounced up and fell on the wrong side of the crossbar.  No Good!

The Bears’ season ended with a double doink thud.

The 26-year old Parkey was obviously heartbroken with the miss that kept the Bears from moving into the second round of the NFL playoffs.

It’s what he DIDN”T do after the critical miss that has made a positive impression on millions of fans.

He pointed upward and thanked the Almighty for having the chance to play professional football.  From there, Parkey went to a prayer circle with his fellow players for a moment of silence and thanks.

Then, Cody faced the Chicago and national media head-on after the game.  He stayed and patiently answered every question.

As expected, Bears fans vented their anger via social media with the expected rage.  Parkey’s Wikipedia page was immediately hacked and amended in a cruel manner.

On Friday’s NBC’s “Today Show”, Parkey was asked to talk about his experience and was praised by the morning team for the manner in which he handled himself after the season-ending loss.

Cody Parkey’s class, poise, and character in defeat reminded many people that participation in the games should be about competition and sportsmanship, too.  It seems to have become more of a rarity in today’s world.

Parkey had a great four-year college career at Auburn.  Though he went undrafted, Cody was signed by Indianapolis, but then traded to the Philadelphia Eagles before the start of the 2014 season.

While in Philly (ironically, the same team which won last weekend’s game), Parkey had a stellar rookie season in which he converted 32 out of 34 field goal attempts and was named to the 2014 NFL Pro Bowl team.

Unfortunately, a groin injury hampered his performance the following season, and Cody was released.

In 2016, it was on to Cleveland.  After one season along Lake Erie, Parkey moved on to Miami to play for the Dolphins.  His excellent season in Miami was good enough to garner the attention of the Chicago Bears.

The Bears play outdoors in windy downtown Chicago along the shores of Lake Michigan.  Many a field goal kicker has been humbled by the swirling winds within Chicago’s Soldier Field.

Though Parkey connected on nearly 77% of his field goal attempts in 2018, it was only good enough for 27th out of the 32 NFL teams.

And, of course, he will be forever remembered for one infamous miss in the first round of the 2018 NFL playoffs.

I suspect that Parkey will get a chance to redeem himself to his teammates and Bears fans in 2019.  Regardless of what happens in Chicago, Cody Parkey’s financial status will be just fine thanks to that generous guaranteed money in his contract.

One comment on the “Today Show” was particularly revealing about Cody Parkey.

“I’m disappointed.  I let the fans, my teammates and the whole organization down.   I’ll continue keep my head high, because football is what I do, it’s not who I am.”

Cody Parkey’s wisdom and his ability to deal adversity went sailing right down the middle of life’s uprights!