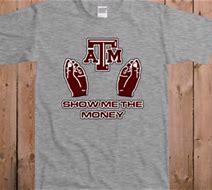 First it was Ohio State’s football program that came under fire.  Then, it was the University of Maryland’s turn.  Tonight, allegations are surfacing from College Station about recent improprieties in Texas A&M’s brand spanking new football regime.  All of this while LSU’s starting wide receiver was booked and jailed in Baton Rouge on a recent battery charge after a series of other unseemly incidents during the past year.

And that’s just the college football news from the past two weeks.

Seriously, it is all quite sickening to hear and read about, but facts are facts.  With the incredible pressure to win college football games and inject millions of dollars into the university’s financial coffers, the probabilities rise that poor decisions will be made by all of those involved in the process.

Let’s take tonight’s story.  After literally rolling out the red (OK, maroon) carpet upon landing in College Station, new head football coach Jimbo Fisher ($7.5 million per year for a ten year contract) is expected to improve upon the record of his predecessor in AggieLand, Kevin Sumlin.  With one college football title to his credit at Florida State, Jimbo Fisher is being paid as if the Aggie faithful expect him to provide them with the same final result in southeast Texas.  Soon.

A former Aggies’ linebacker stated that, over the past few months, he received two “green handshakes” worth $700 from new Aggie linebackers coach, Bradley Dale Peveto (formerly on the staff of LSU’s Les Miles).  The player, who just transferred to the University of Arizona this summer, said, “You know how you tip people in Vegas? He had the cash in his hand and he like handed it to us like, here (with a handshake),”

Good luck with this season, Aggies!

At the University of Maryland, a horrible story about the death of an offensive lineman this summer due to heatstroke-related issues on the practice field has caused an assistant coach to be fired.  In addition, the head football coach, D.J. Durkin, is currently on administrative leave.  The incessant media drumbeat has called for the scalps of the head football coach, the athletics director and even the University president.  Today, the family of the deceased lineman asked for the University president’s head to be spared.

Regardless of the outcomes, the Terps football program will look very different very soon.

Let’s test your memory.  Only two weeks ago, Ohio State University fired an assistant football coach over domestic violence issues involving his spouse.  The school placed head coach, Urban Meyer, on leave pending the investigation concluding.  Thankfully, Robert Mueller’s team isn’t handling this one as the investigative panel may announce their findings as early as Wednesday.

The Buckeyes may be without their head football coach for some period of time.

And, from the bayous of South Louisiana, a starting wide receiver for LSU was charged with second-degree battery of his former girlfriend last Friday and booked into the East Baton Rouge Parish jail.  He also allegedly strangled and punched the female on other occasions.

Good grief.  The preseason stench coming from college football is overwhelming at the moment.

Pampered and, oft times, academically challenged athletes are being recruited by grossly overpaid head football coaches and assistant coaches in order to sell season tickets and school merchandise to refill the pot of gold to pay for the other athletics at the university.

Temptations to do “whatever is necessary” to win (now) can lead to both coaches and players getting caught up in the mania.  Common sense and adherence to the rules continues to be increasingly lacking.

Just like in the NFL, until the season ticket sales slow down, the television ratings decrease and the conga line of dollars finally starts to recede, it is possible that we may see this wave of woes continue for the foreseeable future.

It is going to take years to kill or deflate this bloated behemoth golden goose we love called college football.