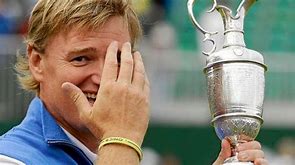 If you’re a golf fan like me, this weekend’s final two rounds of The Open Championship (aka The British Open) promise to have something in store for just about everyone.

Like a challenging venue?  Scotland’s famed Carnoustie golf links have given the world’s best golfers fits for decades.  The winner at this normally windswept golf course near the North Sea usually struggles to complete the tournament with an under-par score.  Patience is a virtue here.

How about legendary winners at Carnoustie?  Padraig Harrington took home the Claret Jug here in 2007.  Before that, winners include Paul Lawrie (1999 – more on him in a moment), Tom Watson in 1975 (his first of five Claret Jug victories), Gary Player (1968), and Ben “The Wee Mon” Hogan in 1953 in his first and only trip overseas for this major championship.

Want a fantastic finish?   Remember Jean Van deVelde?  No, he didn’t win, but his 1999 struggles on the 72nd hole with a three stroke lead made for one of the most unforgettable final holes in major championship history.  Needing only a double-bogey 6 to win, the Frenchman hit his golf ball into the weeds, the stands, and the greenside watery grave called the Barry Burn as he rolled in a gutsy 10 foot putt just to make a triple bogey 7 and ultimately lose in a playoff to Paul Lawrie.

As the players tee-off for this weekend’s final 36 holes, you should have no trouble finding a golfer to root for.

Can Jordan Spieth keep the ball in play off the tee and find the magic again with his putter to repeat as the winner?  If you like past champions, Zach Johnson is right there near the top of the leaderboard.  So is Rory McIlroy from Northern Ireland.

Tiger and Phil?  They both start the weekend six shots back of the leaders (Kevin Kisner and Zach Johnson).  No doubt the golf fans at Carnoustie will be pulling for one of these legends this weekend.

If you like rooting for a deserving golfer to win their first major, look no further than Matt Kuchar (last year’s runner-up) and Rickie Fowler.  Both players are only a few shots behind the leaders starting Saturday’s third round.

How about a local favorite?  Tommy Fleetwood of Great Britain has a growing legion of golf fans with his pleasant personality and flowing locks.  He is only one shot back after 36 holes.

Those numerous bunkers around this golf course are deep and quite menacing.  In many cases, the only way out is hitting the ball backwards the same way it came in.  No wonder some of the pros call this course “Carnastie”!

For me, I enjoy watching golf being played in Scotland’s cooler weather (highs in the 60’s expected) while most of us fry in the heat of midsummer.

Grab a hot beverage and get up early to enjoy “Breakfast at the British Open” as the action gets underway six hours ahead of us in Scotland.

This year’s “Champion Golfer of the Year” will have defeated a truly star-studded field to earn the coveted Claret Jug.