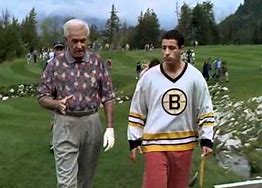 What in the name of Arnold Palmer is going on?

I’m not knocking the NHL or the quest for the Stanley Cup, but, seriously, let’s review the number of NBC-owned channels which decided NOT to carry an NHL playoff game tonight:

I will be the first to say that Golf Channel’s Wednesday night pre-tournament golf coverage of the Valero Texas Open from San Antonio would not draw large numbers of golf fans.

On the other hand, it’s sad that playoff hockey was booted down the dial to make way for other mediocre television shows.  If hockey’s television viewership was more robust nationwide, the games surely would have aired on one or more of the most popular NBC channels noted above.

NHL playoff hockey can be exciting to watch, but the game must attract more viewers (and advertisers) in order to take the next step up NBC’s pecking order.

Stay tuned.  Maybe next week Golf Channel will give us the NHL’s Columbus Blue Jackets against Happy Gilmore, Patrick Reed and the Augusta Green Jackets!