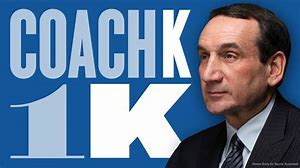 Saturday, for the first time in 23 years, the Virginia Cavaliers won a college basketball game in Duke University’s Cameron Indoor Stadium.  Both teams were highly ranked coming into the game.  Virginia came into the game sporting an astounding 19-1 record, a #2 national ranking, and an unblemished 9-0 in the Atlantic Coast Conference.  Duke defended its home court sporting a #4 AP ranking with an 18-2 mark with both losses coming in ACC play.

This was a dandy game.  For Virginia.

The Wahoos whooped Duke Coach Mike Krzyzewski’s Blue Devils by a final score of 65-63.  Not even Duke’s legendary Cameron Crazies could put the mojo on this Virginia team.  The game truly wasn’t as close as the final score as Duke had to rally late in the second half just to make it close.

Virginia, coached by Tony Bennett (not the singer!), plays a brand of basketball which is the antithesis of the way most of today’s young basketball players are learning to play the game (right, LaVar Ball?).  Virginia plays exceptional defense, milks the clock on offense while setting screens and sending players cutting to the hoop for easy shots, rarely turns the ball over, and just wins.  Some call it ugly.  I call it effective.  Just win, baby!

If you think it is the blue-chip players that Virginia is recruiting, think again.  Duke’s 2017 recruiting class was rated #1.  Virginia?  Drum roll please…#99!   Duke is getting the McDonald’s All-Americans, while Tony Bennett’s team is doing all the hard dirty work back in the kitchen.

Kudos to Coach Bennett and his band of merry Wahoos.  The No-Names of UVa remind me of the San Antonio Spurs of college basketball.  Their willingness to sacrifice for the good of the team is quite impressive.

But that’s where this story turns.  It is what DIDN’T happen yesterday that had me thinking after the game.

Duke’s legendary head coach, Mike Krzyzewski, is one of the all-time best in college basketball.  Duke’s leader for five NCAA championships, Coach K knows what buttons to push with his team and when to do it.  He has been masterful as a coach since coming to Duke in 1980.

On Saturday, though, Duke was uncharacteristically turning the ball over (16 times) to only 4 for Virginia.   Duke shot only 11 free throws in the game and only connected on five of them.  With the game decided by only two points, Duke can only blame themselves for this rare home loss.

This year’s Duke squad is filled with NBA-wannabe freshmen.  Their freshman big man, Marvin Bagley III, was dominating on Saturday with 30 points.  However, while Bagley’s stock soared the more he scored, Duke’s other players were literally standing around.  Coach K’s former teams were known as skilled passers who found a way to get the ball to the open man for the easy basket (like Virginia did to Duke on Saturday).

Coach K’s Duke basketball teams are famous for playing an intense “in-your-face” man-to-man defense.  On Saturday against Virginia, Duke’s players were being burned time and time again by back-cuts to the basket for easy buckets.  Coach K switched to a zone defense (gasp!) for much of the second half to stop the bleeding.  What’s up with that?

And finally this.  As Duke sank into a deep first half hole and struggled coming down the stretch, Duke’s fiery head coach hardly jumped out of his chair or came enticingly close to getting a technical foul to fire-up his players and the crowd.  He was nearly invisible along the sidelines on Saturday.  That’s not the Coach K we all know and (many of us) love.

I have a theory on what’s wrong.  Mike Krzyzewski achieved a big career goal early this season by winning his 1000th game at Duke.  By a large margin, he now has the most wins in Division I college basketball history.

In order to compete for talent with the Kentucky’s of the college basketball world, Coach K has begrudgingly elected to dip into the “One-and-done” pool of high school so-called elite players who simply want to build their resume and join the NBA at the first opportunity.  Like Kentucky, Duke is now increasingly signing players who have little desire to play as a team.  Many are unwilling to buy into the traditional blue-collar, hard-working team concept like Coach K’s teams have been known for.  It appears that Virginia has cornered that market in the ACC.  Duke’s new talent pool is merely passing through.

Though he may be fooling the ol’ Swampswami, Saturday’s subdued Coach K looked to me like someone who is turned-off by the lack of passion and work ethic that his “Hey, look at me!” one-and-done players are displaying.  I see a Coach K who may be lamenting that his days as a master teacher are nearing an end.  Yes, retirement.

Watch this clip from 2016 where Duke’s head coach for the past 38 years talks about when/how he plans to retire.

While observing Saturday’s game and the noticeable lack of passion along the Duke sidelines, I could have sworn Blue Devils’ head coach was daydreaming about the days when his players would come to Duke seeking an education and would play with the heart and effort that Virginia showed on Saturday.