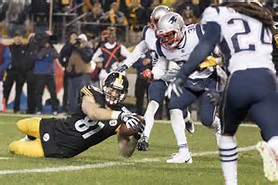 For those who didn’t watch the mesmerizing conclusion of Sundays’ AFC showdown between the division leading Pittsburgh Steelers against their post-season menace, the New England Patriots, you missed a dandy finish.

The hometown Steelers led Tom Brady’s Patriots late in the fourth quarter, but, as usual, Brady found his 6’7″ tight end, Rob Gronkowski, on consecutive plays to drive New England into a 27-24 lead with about a minute left.  However, the 2017 Steelers are no strangers to late game heroics and immediately marched down the field deep into Patriots territory.  Then Ben Roethlisberger lofted a pass to Steelers’ tight end, Jesse James, with 28 seconds left.  James snagged the pass, turned toward the goal line, stumbled, but managed to reach the ball across the goal with the ball securely in his hands.  TOUCHDOWN, right?

Wrong.  In the new age of the No Fun League with its rule book quickly becoming as thick and confusing as an IRS tax form, the referees huddled for several minutes while the eye-in-the-sky television instant replay booth showed that James looked to have briefly lost his hold on the ball as the ball hit the turf after crossing the goal line.

NFL Rule #109-467-999 (or something like that) CLEARLY states (cough, cough) that the receiver must maintain control of the ball all the way through the ground.  Even though, to 99% of the fans watching the game, the Steelers’ tight end had sufficient control as the nose of the football crossed the stripe of the goal line.

Au contraire!  The NFL’s Vice President of Officiating (hmm- I want a job like that!) said that the apparent Steelers’ touchdown was, according to today’s made-for-TV NFL rules, actually an incomplete pass.

And, according to the NFL’s chief interpreter of Silly Rules, this was not a touchdown.

OK, Mr. Officiating.  Now, please answer this one for me.  If a Steelers’ running back were to have caused even a sliver of the football to cross the goal line, it would have been a touchdown – even if he fumbled the ball an instant after crossing the magic line.  How is that any different?

It seems to me that if a football player has control of the ball (pass or run) at the point where the ball crosses the goal line, it should be a touchdown in either case.  Why is a pass “completion” breaking the plane of the goal line any different than a runner’s requirement to be credited with a touchdown?

BECAUSE…This is the NFL 2017.  Where common sense is being lost with every new season.  Where Thursday night games are played for ratings and money with total disregard to mounting injuries to the players.  Where, with increasing numbers of concussions and the knowledge about the long-term effects therefrom, the players are still permitted to launch themselves head first into the helmet of an opposing player without the guarantee of an automatic ejection from the game.  Where the games must be stopped (several times, usually) for television instant replays, yet the NFL executives can’t seem to understand why the number of fans in the stands shrinks by the week.  (And, no, I won’t remind them about the ongoing “knee” problems some players seem to encounter only during the national anthem as it’s been covered enough for this season).

Note to NFL owners and execs – If the dwindling number of in-stadium patrons are still willing to spend their $$$ to watch a game at your stadium, why should they have to watch key parts of that game on a TV screen when they can do the same thing from the comfort of their own home?

Yes, I actually do understand the NFL’s rule about what currently constitutes a catch.  All I know is that it is time to amend the rule as follows:

“If the football is in possession of the receiver at the moment he crosses the goal line, it is a touchdown.  Just like for a running back.  Period.”

Oh yeah, the Patriots intercepted a final last-chance pass in the end zone and prevailed, 27-24.  As usual.  Until next time.  Maybe.