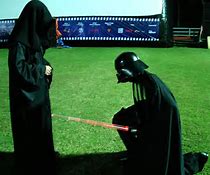 I just love to watch free markets at work!  Check out these juicy sports headlines from the past few days:

Dateline:  Louisville – Papa John’s Pizza founder John Schnatter steps down as CEO this week after his criticizing of kneeling NFL players may have led to a decrease in the company’s stock price.

Dateline: Stamford, CT – WWE Chairman Vince McMahon sells $100 million of WWE stock amid rumors he might want to bankroll a revival of the XFL to compete with the NFL.

What a fascinating set of market changes resulting from NFL fans’ responding to some of the NFL players’ taking a knee at stadiums this season during the playing of the national anthem.  The initial reason given by the protesting players was that their kneeling was not meant to be disrespectful to the US military or the flag but to raise the awareness of perceived social injustice issues.

The Knee Wars situation escalated after the King of Kneeling (Colin Kaepernick) started his personal protests last season.  It gained favor with many other NFL players to start the 2017 season as more decided to add support for Kaepernick and the social justice issues by kneeling en masse during early season NFL games.

In Baltimore, the Ravens’ players gained international notoriety in their early season game played in London.  Many players dropped to a knee during the playing of the US national anthem, but then rose and stood at attention for the playing of “God Save the Queen”.

Baltimore fans were livid.  The city, steeped in US history, is the home of Fort McHenry.  That is where Francis Scott Key penned “The Star Spangled Banner”after the fort miraculously survived a 25-hour British onslaught in 1814.

As a result of the football players’ actions, Baltimore fans (like many around the league) have mounted their own counter-offensive by staying away in droves.  This comes even though the 2017 Ravens are fighting for an AFC playoff spot with an 8-6 record entering Christmas weekend.

In a rare move of honesty, Baltimore Raven team president, Dick Cass, has reached out to fans and asked them to return for the final two home games against the struggling Indianapolis Colts and the Cincinnati Bengals.  And why not?  Even though the Ravens’ home games usually sellout, fewer fans in the stands means less concessions, parking, and team merchandise revenues generated on game days in Baltimore.

Meanwhile, at the Louisville corporate home of Papa John’s Pizza, founder John Schnatter removed himself as CEO yesterday as the company fought a market backlash from a segment of its stockholders over Schnatter’s critical comments about the kneeling NFL players this season.  This time, the stock market bears have used their Jedi light sabers to slice the value of PZZA by $15 per share during the football season.  The stock has plummeted about 20% in 2017, while the overall US stock market gained about 25% during the same period.

Next, ready to capitalize on the chaos, is none other than the CEO of World Wrestling Entertainment, Vince McMahon.  Vinnie Mac is smiling like the proverbial Cheshire cat as the sports media seems to believe that he will try to revive the XFL again to compete against football’s goliath, the NFL.  Remember back in 2001 when the XFL (a 50/50 partnership between the WWE and NBC) aired spring football games?  The XFL – which gave us eight teams and one memorable player named “He Hate Me” – lost $35 million for each party (out of their initial $100 million investments) and meekly folded after its first season.

The WWE’s McMahon comes from a family of wrestling promoters, so he will play coy on the potential use of his recent $100 million stock sale as long as possible.  The stock price for WWE recently climbed above $30/share after starting the year around $19.  Despite all of the media’s speculation, it is also quite possible that Vince may just be ringing the cash register after his company’s stock price reached a recent high.  However, McMahon loves the media spotlight (any publicity is better than none), so the gullible sports media may be falling for another dark side kayfabe from wrestling’s reigning Emperor.

Heading into the Super Bowl and beyond, the NFL and its owners may have a longer term issue than simply lower ratings, attendance, and revenues in 2017 alone.  The long term costs of this “Knee Wars” saga may be only beginning as “The Force” of the markets strike back!