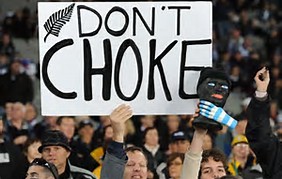 Did you watch the second half of the Texas A&M college football game at UCLA on Saturday night?  I turned the game on midway through the third quarter with the Aggies holding a commanding lead of 44-10.  Think about that.  It would take five touchdowns by UCLA with less than half to go to win the game (they did) and no more points scored by A&M (they didn’t).  Yes, the final score was UCLA 45, Texas A&M 44.  How does something like this happen?

The point of this story is not to shame the “Gaggies”, but there was plenty of blame to go around.  Texas A&M is by no means the only team to blow a commanding lead in a college football game.  The same thing will likely happen somewhere else this week in college football (though, it’s tough to beat an epic 34-point meltdown with only 1 1/2 quarters to go).  More times than not, the spotlight rightly goes to the victorious team who rallied for a late victory (such as Tennessee overcoming a 14-point fourth quarter deficit in defeating Georgia Tech on Monday night).

This happens in professional football, too.  Look no further than last year’s Super Bowl with the Atlanta Falcons leading Tom Brady and the New England Patriots by 16 points with little more than nine minutes remaining – only to lose the game in overtime 34-28.  Falcons’ fans feel your pain, A&M!

Who can forget the 2004 American League Championship series when baseball’s New York Yankees allowed the Boston Red Sox to rise from the dead (a 3-0 series deficit) to grab four straight wins in eliminating their rival Yankees en route to a World Series championship.

Individuals participating in sports have been known to choke on occasion, too.  All golf fans of Phil Mickelson remember how he has let more than one US Open golf title get away from him coming down the stretch.  Phil now holds the US Open record with six 2nd place finishes in the only major tournament he has yet to win.

So, why and how does this happen?  In team sports, you really have to put most of the blame on coaching decisions (or, more correctly, bad coaching decisions).  In Texas A&M’s meltdown last weekend, the team inexplicably went away from what they were doing well and played not to lose.  Then, when UCLA had rallied to within final striking distance, head coach (at least for now) Kevin Sumlin decided to try to pass the football using an inexperienced back-up quarterback who misfired and saved precious seconds to allow for UCLA’s final touchdown possession.

It happens all the time – whatever the sport.  Teams grab a big early lead, congratulate each other on how great they are playing during a timeout or halftime, and then the other team rallies for victory.  It is very much a change in psychology from playing to win versus playing not to lose.  In a team sport, the other team, of course, must seize the momentum and play exceedingly well to obtain the victory, too.

How many times have you watched a golfer (Greg Norman in the 1996 Masters comes to mind) destroy the field for the first three days and enter into the final round atop a large lead?  After sinking putt after putt and playing aggressively for three days, the golfer somehow slips into a mindset of “fairways and greens”, loses his or her momentum and confidence as the round progresses, and then attempts to turn on the jets at the end – only to fail.  It’s tough to watch.

The moral of the story?  Play to win, keep the pedal to the metal until the game has ended, and then humbly and heartily congratulate your vanquished foe after soundly defeating him/them.  As we have seen, playing “not to lose” is one of the best ways to guarantee just the opposite.