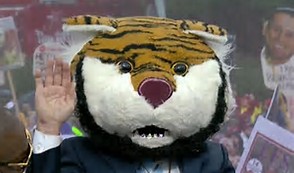 Who would think that an 82-year old former college football coach with a losing record would have become “Must See TV” for many of us college football fans every Saturday morning during the fall?  Lee Corso is back and will once again end each week’s show by donning the headgear of one of college football’s mascots as he makes his fearless prediction during ESPN’s College Gameday telecast.

ESPN brings their live television pregame show to the school grounds of the host school for one the day’s biggest college football games.  Fans of the home team, the opposing team, and people from all around the country gladly show up early on Saturday morning from 8AM until 11AM Central Time from September through November to participate in the fun.

And, since October, 1996, former football coach, Lee Corso, has ended the show on a light-hearted note by making his prediction of the winner of that day’s big game by putting on the mascot’s headgear of one of the two featured teams – much to the delight or cascade of boos from the host team’s fans that day.   Even if you boo him, you have to laugh when Corso then does the “Queen’s wave” with one hand as partners Kirk Herbstreit and Rece Davis howl in laughter while Corso hams it up for the audience.

For most of the three hour program, this live television show, usually located somewhere outside of the host team’s football stadium, is an interesting mix of banter about the weekend’s biggest college football games, other national storylines, and feature vignettes.   At other times, the on-set crew will elicit taunts and cheers from the thousands in attendance as the host college’s marching band usually plays tunes to keep the place jumping.  It’s the ultimate at-home pep rally!

Lee Corso has become college football’s version of college basketball fan favorite, Dick Vitale.  Both men have a genuine love for the game and the fans of the game.  Corso has overcome a stroke in 2009, but his love for the fall football program has kept him working despite having some setbacks the past few years.  It doesn’t matter to Kirk Herbstreit, a former Ohio State quarterback, who obviously loves working with Corso in a father/son type of way.  The chemistry between Corso and Herbstreit comes across as genuine as “Pops” Corso adds a welcome lighter tone to the telecast with his oft-times unintended off-beat comments and humorous takes.

Even my wife will make an appearance in front of the television at 10:55AM on Saturdays to watch Lee Corso put on another headgear selection to the delight of fans, the crew, and millions of happy viewers at home.  Fall means the temperature is a little lower, the grass grows a little slower, and it will be time for Lee Corso’s headgear pick again this Saturday morning on ESPN just prior to the kickoff of the first football game of the day.  I can’t wait, can you?