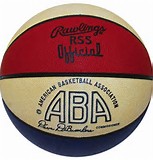 Watching Sunday night’s Game 2 of the 2017 NBA finals between Golden State and Cleveland, I was temporarily transported back to a time when basketball became fun for me.  With a final score of 132-113, these talented players were involved in a speedy brand of hoops filled with lightning-quick fast breaks, three-point shots raining from everywhere, blocked shots coming out of nowhere, some occasional hot-dogging and showmanship, and not very much defense.

Wait a minute! Sunday’s entertaining game looked more like the classic 1975 finals match-up of the Kentucky Colonels versus the Indiana Pacers in the now-defunct American Basketball Association.  The only thing missing last night was a red, white, and blue ABA basketball!

My still-favorite sports league was born 50 years ago in 1967 when the fledgling ABA audaciously announced its intent to become a rival of the stodgy National Basketball Association.  At the time, the NBA was thoroughly dominated by the Boston Celtics (10 championship banners in a row) and their wily cigar-smoking GM and coaching guru, Red Auerbach.  Though the Celtics’ dominance made for great times for fans of the Kelly green and white, league interest in other cities was less enthusiastic.

Timing is everything.  In the summer of 1966, the NFL had finally relented to a merger with their brash and pesky rivals in the American Football League.  With the upcoming football merger, the Super Bowl era began, and the money began to flow (just in time to rescue some AFL franchises).  Right on cue, several opportunistic promoters began to court wealthy benefactors with a pitch that probably went, “If this idea worked in football, why can’t we do this in professional basketball, too?”  With little more than a good salesman’s assurances of owners reaping huge financial payoffs down the line with an eventual merger with the NBA, the American Basketball Association was born.

One of the NBA’s all-time great centers, George Mikan, was hired by this brash group of franchise owners to become the new league’s commissioner.  Mikan is generally credited with the idea of the 3-point line and the red, white, and blue basketball.  The ABA also brought us the All-Star game’s slam dunk and  3-point shooting competitions along with team dance squads and unique promotional events designed to lure paying fans.

With nine teams and two divisions, the upstart ABA East was comprised of the Pittsburgh Pipers (champions), Minnesota Muskies, New Jersey Americans, Kentucky Colonels, and Indiana Pacers while the West featured the New Orleans Buccaneers, Dallas Chaparrals, Houston Mavericks, Denver Rockets, Anaheim Amigos, and the Oakland Oaks.  After nine years of team relocations with many teams annually teetering on the brink of bankruptcy, the ABA ended with just four franchises finally granted admission into the NBA.  In August, 1976, the Indiana Pacers, New York Nets (formerly New Jersey Americans), Denver Nuggets (changed nickname from Rockets after 7 seasons), and the San Antonio Spurs (relocated from Dallas after first six seasons) were brought into the NBA, while the majority of remaining ABA players were gobbled-up by NBA teams in a dispersal draft.

PS – Hey, NBA…why don’t you bring back the red, white, and blue basketball for a fun week of “50-year ABA anniversary” tribute games during the preseason this October?!!