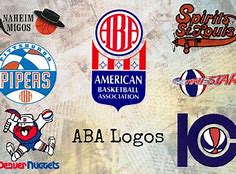 Over the weekend, it dawned on me that all four of the basketball teams from the American Basketball Association back in 1976 were in the NBA’s first round playoffs this year.

The ABA’s Indiana Pacers, Brooklyn Nets, Denver Nuggets, and the San Antonio Spurs all made it into the 2019 NBA playoffs.

San Antonio has made it into the NBA playoffs for a record 22 straight seasons (winning five NBA championships during that time).  None of the other three ABA teams have won an NBA championship yet.

So, with the ABA quartet into the first round of the NBA playoffs, my ancient basketball brain took an enjoyable nostalgia trip back into the 1970’s to look at the always fun and suspenseful drama on the nine-year history of the ABA.

In the late 1960’s, it became clear that football’s American Football League was going to “make it” and join the established National Football League.

The next great sports idea was to do it again – this time with a competing basketball league!

At the time the American Basketball Association was born in 1967, there were only ten NBA teams (there are now 30!).

The ABA and began play in eleven cities.  Below is a list of the original teams and nicknames:

Only the top four teams above ended- up coming into the NBA nine years later in 1976.  However, only the Indiana Pacers and the Kentucky Colonels stayed in the same city for all nine years of the ABA’s existence and never changed nicknames.

The Denver Rockets officially changed their nickname in 1974 to “Nuggets” after the NBA moved the San Diego Rockets to Houston (a city which had failed miserably in the ABA).  By 1974, Denver was hopeful that their ABA team would be accepted into the NBA. Even if the league folded, the city felt comfortable that it would likely receive an NBA expansion team soon thereafter.

The Houston Mavericks’ ABA franchise was moved twice.  After two seasons in Houston playing to sparse crowds, the team moved to North Carolina and became the Carolina Cougars as it played home games in the cities of Greensboro, Charlotte, Raleigh, and Winston-Salem.

Five years later, the team was moved again to St. Louis and became “The Spirits of St. Louis” for two seasons before the league was dissolved.  The team played to crowds in St. Louis of less than 1,000 per home game.

The owners in St. Louis had been left out of the NBA/ABA merger, but they demanded to receive a percentage “cut” of the future television revenues associated with the ABA franchises in perpetuity.   In the merger year of 1976, the NBA and ABA television revenues were relatively insignificant (a few million dollars per season).

However, by the year 2012, reports claimed that the owners of the defunct St. Louis ABA franchise had received an estimated $255 million in television revenues since the league’s 1976 merger with the NBA.  In the past few years, the NBA negotiated a buy-out and renegotiated to award the ABA’s St. Louis owners over $500 million in cash and a much smaller future TV royalty percentage.

Meanwhile, other ABA franchises simply wandered from city to city and ultimately folded.

The Minnesota Muskies became the Miami Floridians after just one year in 1968.  Like the team in Carolina, the “Floridians” then traveled around the state with Miami, Tampa-St. Petersburg, Jacksonville, and West Palm Beach hosting “home” games for four years until the team folded in 1972.

The New Orleans Buccaneers swashbuckled their way to the first ABA championship back in 1968.  By 1970, the team moved to Memphis (nicknames ranged from Pros, Sounds, and TAM’s (Tennessee-Arkansas-Mississippi – GENIUS, eh?).

In 1975, the team moved to Baltimore and renamed the “Hustlers”.  After public protests prior to their first game, the team changed names to “Claws”.  They folded during the Preseason in Baltimore in 1975!

The Oakland Oaks survived for two seasons before moving to Washington (Capitals) in 1969.  After only one season, the team relocated to Virginia and, like Carolina and Miami, traveled from city to city (Norfolk, Hampton, Richmond, and Roanoke) for their home games for the next six seasons before the team folded just one month prior to the ABA/NBA deal in 1976.

The Pittsburgh Pipers played one year in the Steel City and then, despite solid attendance (by ABA standards, that is), moved to Minneapolis for its second season.  Lack of attendance in Minnesota in 1968 forced the team to move back to Pittsburgh in 1969.

The team came back to Pittsburgh but the fans weren’t happy that the Pipers “played them” (pun intended).  So, management opted for a “Name the Team” contest.

The winning entry was the Pittsburgh Pioneers.   A local college already had the Pioneer moniker and threatened to sue!  Thus, the team became known at the Pittsburgh Condors for three seasons before the team folded in 1972 (four years before the NBA/ABA merger).

The original Anaheim Amigos became the Los Angeles Stars in 1968 after just one season.  After two lackluster years in the big city, the Stars relocated to Salt Lake City and became the Utah Stars.

The Utah Stars drew great crowds (8,500 per game), but the owner apparently wasn’t very good at managing the team’s expenses. The team folded in 1975 after the owner missed the team’s payroll.

The ABA’s teams and talented players gave the NBA some much needed energy and innovation at a time when professional basketball was struggling to find its niche.

SwampSwami salutes and will forever treasure his memories of the ABA!