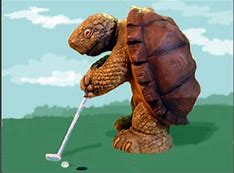 If you’re a golfer, you know that nearly every golf course has a sign posted near the first tee which suggests that a round of golf should be played in no more than four hours.

At many public and private golf courses, a marshal rides a cart around the layout to make sure that one or more groups don’t hold up the rest of the golfers.

If the average golfer struggles to break 100 shots per round is asked to finish a round in four hours, please explain to me why the best golfers in the world cannot complete a round of golf in less than 5 hours anymore?

This weekend, the Genesis Los Angeles Open was won by J. B. Holmes.  Holmes has been one of the longest hitters on the PGA tour for several years.

He has also become one of the slowest players on the tour.

Holmes picked up his fifth career win and his first since 2015.  It took his group five hours and thirty minutes to play the final round on Sunday.

That’s right.  The best golfers in the world played their final 18 holes in ninety minutes longer than you and I are expected to play a round of golf at our local public course!

How can this be allowed?  Other than Phil Mickelson and Tiger Woods, pro golfers are rarely in the trees, traps, and water hazards as often as we do.

“Well, you play in 25-mile-an-hour gusty winds and see how fast you play when you’re playing for the kind of money and the points and everything that we’re playing for,” Holmes said. “You can’t just get up there and whack it when it’s blowing that hard.”

He played the round with another veteran PGA tour terrapin named Adam Scott and slothful young star, Justin Thomas.

Adam Scott admits he recently told the PGA Tour’s chief of tournaments and competitions, Andy Pazder, that he would be willing to take a two-stroke penalty in order to get players to speed up.  Seriously?

“Make me the victim,” the 2013 Masters champion and 13-time PGA Tour winner said. “I’ll take the penalty. The only way it’s going to work is if you enforce it.”

Another slow-playing PGA Tour-tle is Bryson DeChambeau.  DeChambeau was a physics major at SMU and appears to take all conditions (wind speed, relative humidity, time of day, ground elevation, phase of the moon and tides, etc.) under consideration prior to taking a shot from the tee, fairway, or on the green.

DeChambeau has been quite successful in his early PGA tour career with five wins as he begins his third full season on the big circuit.   As for his tendency to be overly meticulous (i.e. – S-L-O-W), he recently said:

“I think that anybody that has an issue with it, I understand, but we’re playing for our livelihoods out here, and this is what we want to do. If we want to provide the best entertainment for you, it’s part of our process. It’s part of my process, at least”.

Though many PGA tour players seem to be just fine with the snail-like pace of play, others aren’t.  Two-time US Open champion, Brooks Koepka, doesn’t understand what is taking the other players so long to hit a shot.

Koepka is confused as to why the PGA tour fails to follow its own rules for enforcing slow play (two-shot penalty).

In an interview last week, Koepka said,  “I think it’s weird how you’ve got this set of rules where — you know, we have to make sure we’re dropping from knee-height, or your caddie can’t be behind you – and then they also have a rule where you’ve got to hit it in 40 seconds, but that one is not enforced. You enforce some but you don’t enforce the others”.

What about television, you ask?

More times than not, nationally televised golf events are exceeding their allotted network time and being pushed over to the Golf Channel for final round completion.  The reason? Slow play by the best golfers in the world.

If you owned Golf Channel, you are probably elated by the slow play in order to get more viewers’ eyeballs noticing your specialized cable channel.

However, if some viewers don’t pay the extra monthly premium to receive Golf Channel, you likely missed the finish of Sunday’s final round in Los Angeles.

Once the television revenues for the PGA Tour start to decline with lower ratings in the post-Tiger Woods and Phil Mickelson dominance era, the officials with the PGA Tour may finally start throwing the penalty flags at the growing number of pokey players.

Personally, I think there should be a 30-second shot clock (down from 40) on every shot (from tee to green), and professional golfers should be penalized two shots for each time slow play occurs during a round.

When these slothful slowpokes begin to see their name falling down the leaderboard and dollars leaving their wallets due to their continued slow play, I suspect the pace of play in golf will return to more acceptable levels.

Fore my two cents and the betterment of golf, it’s time for these PGA Tour-tles to pick-up the pace.  NOW!