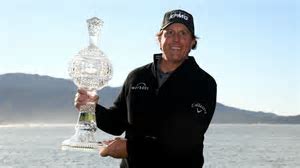 Phil Mickelson won the extended Monday morning finish of the AT&T Pebble Beach Pro-Am with a three shot victory.   The tournament was suspended Sunday night due to darkness after a rare hail storm littered the scenic Pacific seaside golf course for about two hours during the final round.

With the victory, Mickelson claimed his 44th professional career title which ranks Lefty in ninth place on the PGA all-time victory list.

I was surprised to learn that Phil has been on tour for 29 years.  For PGA players with at least one professional win, only Sam Snead and Raymond Floyd (30 seasons) have played longer on the big tour.

In addition to turning 49 years old on that Sunday, it is also Father’s Day and the final round of the US Open golf championship.

With three Masters’ green jackets and one win each at the British Open and PGA Championship, the US Open is the only professional golf major championship which has evaded Phil Mickelson’s trophy case.  He has finished second in this event a record six times during his golfing career.

With a “Happy Birthday/Father’s Day” win this June at the US Open, Mick would become the sixth professional golfer to win the career “Grand Slam”.  He would join Jack Nicklaus, Tiger Woods, Gary Player, Ben Hogan, and Gene Sarazen in this elite golf club.

With Phil Mickelson’s win on Monday at Pebble Beach Golf Links, it marked his fifth career win at one of the most beloved golf layouts in the world.

In June, the US Open will be played at…drum roll…the very same Pebble Beach.

Phil Mickelson was born in southern California and still resides in the San Diego area.  Even if Tiger Woods is in the mix this June at the US Open, Phil’s boisterous fans should dominate the grounds of Pebble Beach that weekend.

While it is great to have the majority of the crowd in your corner, it can put additional pressure on a golfer, too.

I am reading Arnold Palmer’s book “A Golfer’s Life”.  Palmer was at the top of his professional popularity when the 1962 US Open was contested at Oakmont Country Club near his western Pennsylvania hometown of Latrobe.

Palmer, like Phil Mickelson, was a huge crowd favorite, and “Arnie’s Army” really wanted their favorite golfer to take down a young upstart named Jack Nicklaus that week.

Arnie said that Nicklaus’ concentration (especially while the pro-Palmer western Pennsylvania golf fans were quite rude to Jack) was the best he had ever seen on a golf course.  The final round ended in a tie, and Arnold Palmer’s playoff loss to Nicklaus at Oakmont the following day was one of his biggest professional disappointments.

In the book, Arnold Palmer said that he later asked Jack Nicklaus to travel with him in hopes of finding out the secret of Nicklaus’ amazing ability to concentrate and focus on the golf course.

Arnie, like Phil Mickelson, was known for his “go-for-broke” playing style.  Just like most average golfers who spend a lot of time hacking out of the rough, the trees, and the bunkers, Arnold Palmer and Phil Mickelson uniquely bond with those players by their ability to recover from occasional errant shots.

Also like Arnold Palmer, Phil Mickelson doesn’t shy away from his adoring golf fans and generally has a smile or wave for his legions of followers.  Mickelson’s fans call themselves “Phil Phanatics”, and they will be lining the fairways and greens of Pebble Beach en masse this June.

Palmer mentions in his book that his biggest professional defeats came when he would lose his own concentration on the golf course while Arnie’s beloved “Army” was prone to congratulate him a wee bit too early in the last round prior to the final putt being made on the 72nd hole.

Arnold Palmer mentioned in his book that his tough father (Deke Palmer – whom he called “Pap”) would tell his son to “Never quit, never look up, and, most of all, never lose your focus until you’ve completed your round”.

Phil Mickelson would be wise to head those thoughts this summer as he attempts to win his first US Open on a golf course where he has seen great professional success and with legions of fans ready to pat him on the back before the tournament ends.

It’s only four months until the US Open in mid-June.  This is going to be fun!