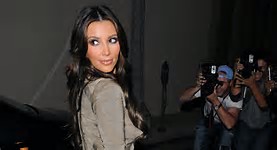 Good ol’ LaVar Ball (the non-stop quote-machine Dad of NBA rookie, Lonzo Ball) has been back in the news the past few days.  This time, LaVar Ball made a spectacle of himself as coach of his AAU team (named “The Big Ballers”, of course) at a hoops tournament this week in Las Vegas (which also begs the question, “Where do these kids/teams get all of the money required to do this stuff, anyway?).

LaVar Ball, whose claim to fame is that he is coaching/raising his three basketball-playing sons, received a technical foul on Friday from a female referee and proceeded to demand that she be replaced or his team would walk off the floor.  Believe it or not, she was replaced!

On Saturday, he provided more fodder for the drooling sports media/paparazzi by saying that the female referee needed to “stay in her lane” (whatever that means), that she was out of shape (look into your own mirror, LaVar), and that “She got caught in a bad place – messing with me”.  Ugh.

As sad as this is to say, there have been, are, and will continue to be LaVar Ball-type coaches working with our kids.  I played sports years ago and survived a few of coaches like this.  You try to endure that coach for a season (or two) and fondly appreciate your best coaches a bit more.  The LaVar Ball-type coaches may sincerely mean well, but they are a lousy example on showing kids how to deal with a variety of life’s issues.

So, why is this man even in the sports news?  Better yet, why would media companies spend any money covering LaVar Ball’s AAU summer league team?

The best that I can figure is that LaVar Ball has become the Kim Kardashian of the new 24/7 sports media.  Though both personalities have virtually no significant talents worthy of the outlandish media attention, LaVar Ball and Kim Kardashian are both reliable sources of nuggets of risque sound-bites and photos to help fill the pages in the dearth of any “real” news.  If there is nothing better to cover, the media (including those covering sports) can usually count on audio and video from people like this to attract curiosity seekers.

In sports, this type of media coverage used to involve those individuals actually involved in the game (such as Pete Rose and Reggie Jackson in baseball, boxing’s Mohammed Ali, basketball’s Charles Barkley, football’s Jim McMahon, and golfer John Daly).  Sadly, today’s sports media has chosen to reach even lower and provide paparazzi-type coverage to non-playing “spotlight addicts” such as LaVar Ball.

Just wait.  It’s only a matter of time before ESPN or some other ratings-seeking media outlet will do a reality show featuring LaVar Ball.  There apparently is an audience who actually wants to read more about LaVar Ball and his antics.  As stated in a previous post, I personally hope that LaVar Ball will sign a contract with the WWE soon and become a professional wrestling manager where his outlandish comments and actions are better suited as part of the show.

As a real-life leader of young men, though, I don’t find this man’s shtick funny at all.