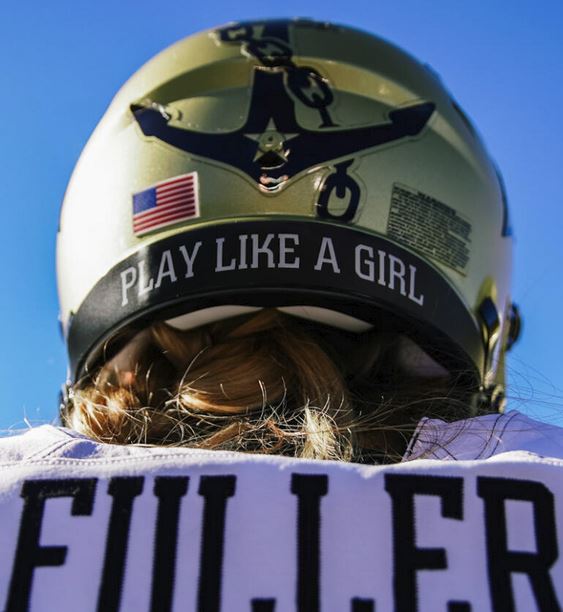 The year 2020 continues to set the bar for the strangest ever.  Over this sports weekend, we had a number of odd “2020” type of things happen.  Here are just a few:

You may not have heard very much about sports items #1-3 above.   The sports media has gone Lady Gaga over the saga of Vanderbilt’s female soccer player who briefly made it onto the playing field in the Commodores’ latest loss.

In Vanderbilt’s case on Saturday, though, this was downright embarrassing.  It was embarrassing to the other football players (who have worked hard in high school and college to earn a spot on a college football team).  It was also embarrassing to Vanderbilt University’s athletics reputation for pulling such a dangerous shenanigan as this young lady could have been seriously hurt during the game on Saturday.

Let’s cover what happened and why I feel this way.

Vanderbilt’s four other kickers on the team roster apparently had been exposed to the COVID-19 virus last week.  Coach Derek Mason’s football team was in dire need to add a placekicker prior to Saturday’s game at Missouri.  To make matters worse, the student body was primarily at home due to the Thanksgiving break.

According to a report, a Vanderbilt women’s soccer coach was contacted by someone within the athletics department to inquire if one of the school’s SEC championship women’s soccer team might be a good candidate for this week’s placekicking job on the school football team.

First and foremost, it would seem to be the most prudent option to ask the 100 current players on the Vanderbilt football team roster if any of them had any previous experience in placekicking (high school or junior high).  Something tells me that at least a few players might have some prior kicking experience.  Perhaps a few players knew of a former teammate attending college at Vanderbilt with prior kicking experience.  Did the coaches even ask the players?

For this discussion, let’s assume that (1) NONE of the non-COVID football players had ever tried their hand at placekicking (2) The players didn’t know of any other non-scholarship students with previous kicking experience and (3) what other options can we think of on really short notice?

Allow all four of the above groups to try-out for the job on a weekday before the game.  Between the intramural teams, the football players, and the women’s soccer team, there’s a good chance that someone could step-in and perform for the Commodores on Saturday.

Nope.  That would have been a fair way to handle the issue.  And that is what I find most objectionable with this overly-hyped story from last weekend.

If this was same problem were to have occurred at the University of Alabama, I would suspect that legendary coach Nick Saban would have approached this unique problem in a similar manner as covered above.

Instead, the worst football team of the SEC (Vanderbilt) chose a totally different path.

The person selected for the emergency placekicking job (Sarah Fuller – a senior on the Vanderbilt women’s soccer team) seems to be a fine person and a great student.

Sarah Fuller (who is a majoring in Medicine, Health, and Society) was a three-time All-SEC academic honor roll winner while serving as a back-up on the team.  As a senior, she finally started several games as goal keeper for the Commodores’ women’s soccer team.

Unfortunately, Sarah Fuller had zero prior experience as a football placekicker heading into Saturday’s game at Mizzou.  Do you think she was fully aware of just how hard college football players were capable of hitting her while on the field of play?

Somehow, though, Sarah Fuller checked all of Vanderbilt’s boxes and was selected for the job last week without a fair competition being held to find the best possible kicker on campus (male or female).

Sarah Fuller exclaimed, “I made the first one in practice, and I kept making them.  It’s different than a soccer ball, but it felt good.”

More incredibly, Vanderbilt head coach Derek Mason also allowed Sarah Fuller (who had yet to even kick the football one time as her team was losing 21-0 at the half) to speak to the entire team during halftime, too.  Vandy freshman quarterback Mike Wright said, “She basically just gave us a pep talk and said, ‘Hey guys, we got to come on. Your teammates are out there fighting on the field.’ ”

Though it wasn’t a classic “Win one for the Gipper!” speech, I can only imagine how embarrassed most of the 100-or so other football players (who have spent years of practicing football and months at Vanderbilt training, lifting weights, and learning the playbook – all while getting physically knocked around by every opponent this season) must have felt during that halftime moment, too.

Nothing like the voice of experience – someone who had never actually played a down of football – to help lift the team, eh?

Rookie placekicker Sarah Fuller’s motivational speech failed to rally the Commodores team.   Fuller finally got her moment right after the half, though.  Her “ground breaking” second half kickoff for the Commodores squibbed along the ground for nearly 30 yards before being downed without an attempted runback.  Meanwhile, Vanderbilt’s other 100 football players muddled through the second half of a 41-0 shut-out at the hands of Mizzou to slap the Commodores with their eighth loss in 2020 without a single victory.

On the day after the Missouri game, Sarah Fuller’s #32 football number is still showing up on the Vanderbilt team football page.  Apparently, she wants to remain a member of the football team, too.

“I’ll stay around as long as they want me, till they like, kick me off,” Fuller said Sunday. “So I’m here for the long run.”

The towering 6’2” Sarah Fuller spent Sunday attending football meetings.  She claimed that her longest practice field goal last week was 38 yards and believes she can improve as a kicker with more reps.

This week, the winless Vanderbilt football team travels to Athens, Georgia this Saturday to face the #9 ranked Georgia Bulldogs.   The 6-2 Bulldogs’ special teams group will not be amused by seeing Vanderbilt’s female placekicker trot onto the field on Saturday.

There will be eleven very large and athletically gifted players wearing Georgia’s home red uniforms trying to make their own bit of history this Saturday if Sarah Fuller takes the field again.

If she happens to take the field to play this weekend, Sarah Fuller will be fair game for being hit during the process of a kick-off, extra point or field goal attempt.

However, the head football coach at Vanderbilt who brought “The Sarah Fuller Show” to the SEC won’t be along the sidelines handing out lollipops or participation platitudes to his former players.

In another incredibly “2020” moment of the college football season, Derek Mason was fired on Sunday by Vanderbilt’s athletic director.  SHE just happens to be Candice Lee Storey, the first black female AD in Southeastern Conference history!

Whoever becomes the next head football coach is at Vanderbilt University, he (or she) will have to convince the returning football players and new high school recruits that Vanderbilt places as much value on winning football games as the school does in making social statements.

After last Saturday’s publicity stunt, Vanderbilt placekicker Sarah Fuller will have a BIG target on her #32 jersey this weekend in Athens, Georgia. If, God forbid, this young woman gets hurt playing football in Georgia, the next head football coach at Vandy will need to be a superlative salesman in order to put a serious football program back together again.

The Vanderbilt Commodores’ athletics slogan has been to “Anchor Down!”  After Saturday’s game in Missouri, Vanderbilt’s football program now appears to be the SEC’s football equivalent of the SS Minnow with Gilligan at the helm as the ship’s wheel spins wildly out of control.

Vanderbilt’s football program has shipwrecked and might find itself stuck on an island for years and years to come.