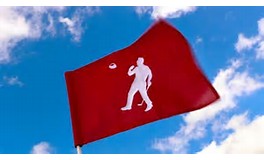 The 2017 US Open golf tournament at Erin Hills in Wisconsin is now over.  After a final round 5-under par 67, Brooks Koepka grabbed the tournament title with a record-tying 72-hole score of 16-under par.  Koepka’s winning tally tied Rory McIlroy’s 16-under total recorded in 2011.

The bad news (especially for Fox Sports) was that Sunday’s final day of golf action lacked any significant drama for television.  No doubt, Brooks Koepka was a deserving US Open champion who played consistently well on Sunday.  He was machine-like in hitting fairways and greens en route to carding a final round of 5-under par 67 and pulled away to a 4-shot final margin.  The biggest news was that most of the other US golfers failed to muster an Arnold Palmer-like charge to challenge Koepka down the stretch.

Rickie Fowler, ranked #9 in the world and still seeking his first major win, was on the cusp of making a run after the front nine.  However, Fowler bogeyed two holes early in the back nine and faded into a tie for fifth place with a closing round of even-par 72.

Then there was Justin Thomas.  Ranked #13 coming into Sunday, Thomas was in the day’s final pairing and just one shot off the lead going into the final round.  He spent much of the front nine getting acquainted with the knee-high fescue rough of Erin Hills.  He went 3-over par in his first five holes and was never a factor after that.  Thomas shot a closing 75 and finished tied for ninth place.

The only scintilla of drama in the final round was provided by a plucky left-hander who led the tournament after 54-holes.  No, not Phil Mickelson!  Brian Harmon, doing his best Phil-the-Thrill imitation on the front nine, calmly rolled in a number of clutch putts early Sunday to stay near the top of the leaderboard.  On the back nine, though, Harmon dropped shots for bogies on holes #12 and 13 just as Koepka was adding three consecutive birdies to coast to victory.  Between Mickelson’s record-setting six runner-up finishes and Harmon’s second place finish on Sunday, a left-handed golfer has yet to win the coveted US Open.

The beautiful, long, but treeless golf layout of Erin Hills in Wisconsin was hindered in the first three rounds by rain-softened greens and a lack of wind.  The players peppered the relatively-benign course with a record number of under-par rounds.  The 36-hole cut of 1-over par tied the US Open record for the lowest score making the cut.

As the final round dawned, though, the long-awaited Wisconsin winds were finally blowing over 20 mph early Sunday, and the early golfers’ scores began to rise.  However, like much of this week, the afternoon winds faded back to a Sunday breeze as the leaders took to the course.  No wind = no drama!

Though the rolling Wisconsin landscape was gorgeous, the greens were in perfect shape, and the Badger state crowds were loud and supportive, the United States Golf Association apparently forgot that Wisconsin in the month of June is generally not very windy.  Since this layout was designed for the wind to be the primary foil of the professional golfers, somebody apparently forgot to tell Mother Nature to please make a much-needed adjustment.  For the golfers who landed their drives into the generously-wide (by US Open standards) fairways, Erin Hills simply played far too easily for the new breed of professional golfer.

I believe Erin Hills should get another chance to host the US Open down the line.  Next time, though, let’s hope that the fairway landing zones will be significantly narrower with additional bunkers strategically placed to discourage 350-yard monster drives from the modern-day bionic “Bombs Away!” brand of golfers.